This isn’t just an American disease. LOL. But texting can wait in the new year 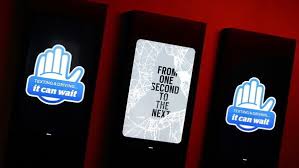 If there’s just one New Year resolution you make, it should be this: No texting while driving. You don’t have to wait to watch Werner Herzog’s haunting 35-minute film to know, in your bones, the terrible consequences. In 2011, 3,331 Americans died in distracted driving accidents, up from 3,267 in 2010. Here, there are other, similarly stark US statistics that underline the dreadful temptation and terrible risk of texting while taking your eyes off the road (the equivalent of driving blind) for a crucial five seconds.

And it’s not just an American affliction. As Mr Herzog’s painfully accurate film, ‘From One Second to the Next’, shows, life can change in a split second for anyone, anywhere. The film opens with a wheelchair-bound young boy, Xavier. He was paralysed from the diaphragm down after a woman driver flew through the red lights in Wisconsin, texting to someone “On my way”. Xavier could just have easily have been in Delhi or Doha or Port au Prince. We’ve all seen drivers take their eyes off the road to read a text message. Sometimes, we may have done so ourselves.

That last sentence raises interesting issues. Discuss texting while driving with almost anyone and chances are, they will solemnly tell you that they never ever mix the two.

But surely someone somewhere is always at risk of injuring someone like Xavier. Recognising that it might be me was Mr Herzog’s challenge. He delivered magnificently.