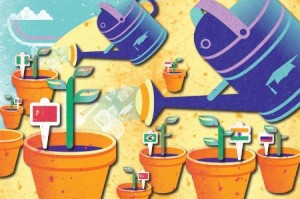 Former Goldman Sachs economist Jim O’Neill, aka the man who made BRICs a household term, is being credited with the new fascination for MINTs. Which is to say Mexico, Indonesia, Nigeria, Turkey, the new BRICs so to speak, or frontier markets with promising economies much smaller than those of Brazil, Russia, India and China.

Some say that Mr O’Neill is not really the father of MINTs. Bloomberg View columnist Matthew C. Klein has tweeted that Fidelity coined the term MINT back in 2011.

Whatever the reality, the rise of the MINTs and the loss of market interest in BRICs is a salutary story of the way in which investors are able to move on if growth and development falls short of expectations.

On the BBC and everywhere else, Mr O’Neill has been directing the world’s attention to the MINTs, which “have very favorable demographics for at least the next 20 years” and economic prospects to match. They will never live up to the BRICs, he says, which will always remain much larger but they could rise into the ranks of the top 10 global economies by 2050. They share very multi-dimensional trade patterns and there is more natural affinity among MINTs than BRICs.

Two MINT-green decades of growth then?