Oprah’s show and GQ magazine voted Le Tub as purveyors of the best hamburgers in America. I’m not sure that’s strictly true, (my vote still goes to Joe Biden’s favourite, Ray’s Hellburgers in Arlington, VA) but Le Tub is certainly a slice of Americana. Right on Florida 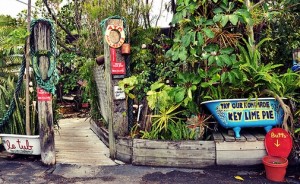 It’s festooned with old toilet seats, has bathtubs for casual seating and boasts probably one of the world’s biggest collections of tat in a confined space.

The owner (mine host) describes the effort as follows: “Established November 2nd 1959 as a Sunoco gas station…. Closed by the energy crunch of the early seventies, your Host purchased the barren property in 1974 and dedicated a concentrated year personally hand building LeTub totally of Flotsam, Jetsam and ocean borne treasures all gathered daily over 4 years of day break jogging on Hollywood Beach.”

One has to recognize that Le Tub distinguishes Fort Lauderdale in a way a McDonalds cannot. Cities need quirky people, restaurants and memories.

Where else but in America?