Muir Woods, half-an-hour out of San Francisco, is the city of trees, not just any trees but giant redwoods, Sequoia sempervirens, most of which are between 500 and 800 years old. These are the tallest of all living things. One, very venerable tree, is nearly 1,200 years old. When this tree was a seed no bigger than a tomato, as the theologian and professor of religious history amongst us reminded the party, Rollo (the rather disreputable but determined Viking), was eying Paris and besieging the area of northern France now known as Normandy.

The redwoods are no throwback to the past; they are the past, a reminder that 150 million years ago, trees like these grew throughout the US and are now to be found only in a narrow, coastal belt from  Monterey to Oregon.

The tallest coastal redwood at Muir Woods is about 258 feet, which the US National Parks Service estimates as approximately the height of a six-foot person stacked head to toe 45 times.

Thoreau once remarked on how remarkable it was that the history of the apple tree was closely connected with that of man. The redwoods have seen more than most. It was here, in Muir Woods’ hushed sacred space, Cathedral Grove, that they held the first United Nations conference on May 19, 1945. Delegates from 48 nations came together in an ancient grove with hope and plans to establish a lasting peace after the Second World War. 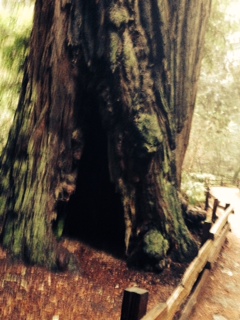 Many trees show signs (see left) of having suffered a fire, perhaps say the professionals, a mere 150 years ago. Such fast stats help concentrate the mind. Nothing happens overnight here. Nor does it need to.

In a curious way, the forest is also a reminder of the great age – nearly 115 years – and foresightedness of America’s attempt to protect its natural wealth.

It took one Congressman, William Kent and his wife Elizabeth, to notice that just one ancient, towering redwood forest remained intact around San Francisco. They bought it from the local water company, donated it to the federal government and it became America’s first National Monument to be created from land donated by a private individual.