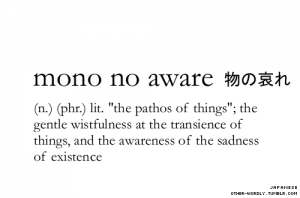 Mr Roberts’ succinct analysis of the joys of sadness, sneaked up on International Happiness Day. It probably caused glum faces all around for those with the grinning disease and the unquenchable thirst to strew roses from their metaphorical hats, unseasonable or not.

He quotes Hartley Coleridge (who could hardly have been ecstatic that he was so much less well known than his father Samuel Taylor). In his essay, dolefully titled ‘Atrabilious Reflections upon Melancholy’, Hartley C. says melancholy cannot exist in a mere animal; it is only for the more evolved.

“I listen to money singing. It’s like looking down
From long French windows at a provincial town,
The slums, the canal, the churches ornate and mad
In the evening sun. It is intensely sad.”

Everywhere, if only we stop to look, there are reminders of the elegance of melancholy. The Japanese phrase mono no aware means the beautiful sorrow of things; sunt lacrimae rerum is literally about there being tears in everything. The rose and the thorn. The bee and its sting.