In Milot, Haiti’s connection with Benin lives on – in DNA & drumbeats 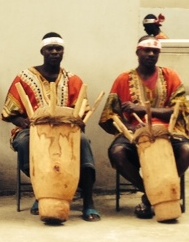 It was Milot in northern Haiti that received the last slaves imported into the world’s first slave republic. This was in 1809, five years after Haiti threw off the yoke of slavery and declared itself an independent nation. That last slave import was unintentional. A roughly 300-strong group from Dahomey (present-day Benin) was bound for the US, but the ship mistakenly put into port at Cap Haitien. Henry Christophe promptly helped liberate the men and installed them in enviable positions – as the Royal Dahomets, his elite bodyguards and the primary agents of his authority.  The Royal Dahomets were given superior accommodation, in barracks not far from Christophe’s San Souci palace. Today, the barracks house a primary school.

In the eyes of many of the locals, these men, a brilliant, glistening black, were superior in a key way – they were the real thing; a pure strain; from Dahomey, a place to which they could authentically point as their home. Most Haitians could only mythologise their mixed genetic inheritance from disparate parts of Africa.

Today, the Dahomey contingent lives on in Milot, Maurice Etienne of the town’s Lakou Lakay, tells me. “They are in the people around here because of the children they fathered. And the drumming,” he says.

This is why Maurice’s small restaurant, serving his wife’s delectable cooking, has three drummers dressed as if from Benin to welcome guests.

In Milot, Haiti and Benin meet in a way impossible for myth-making to bring to life.