Be it Cairo or Port au Prince, graffiti only ever covers part of the journey 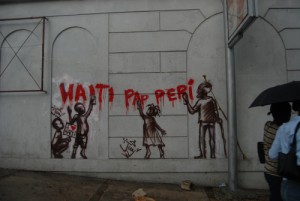 This rather interesting Open Democracy piece on graffiti, the “new form of expression on the walls of Cairo”, was a reminder of the incredible power that scribbles and doodles in public spaces have exerted down the years.

Imad Rasan, a PhD candidate in sociology at Sweden’s Lund University, argues that the graffiti is a sign of the strength of Egyptians’ desire to participate and push through change. “Through art and aesthetic production like graffiti, audiences and spectators are not merely recipients; they become effective actors. This kind of art is not about survival; it is produced to make change, but it may also shed light on the hidden struggle between traditional and modern cultures, between two kinds of norms and value systems or paradigms, between old and new thoughts concerning how Egypt ought to be after the incomplete revolution,” he writes.

Perhaps. But graffiti may embolden and yet produce no more than an incomplete revolution or even a crypto-revolution. Remember Jerry Moïse Rosembert, whose stirring graffiti after Haiti’s 2010 earthquake, became for many Haitians, as the media said, “a rare symbol of resilience and strength at a dark period in the country’s history.”

Mr Rosembert’s role came to be that of a social critic, with a selection of murals around Port au Prince, portraying upbeat message about Haitians and Haiti’s future, critiques of foreign aid and domestic post-quake political squabbles. He depicted the corruption that marked the aid effort and the deadly cholera outbreak unwittingly caused by UN peacekeepers.

Was it significant at the time? Absolutely. But, four years down the line it wouldn’t be imprudent to say it certainly was not a game-changer, a call to revolution and one that was heeded by eager foot-soldiers.