A cinema hall for Port au Prince by July? Hope but don’t hold your breath 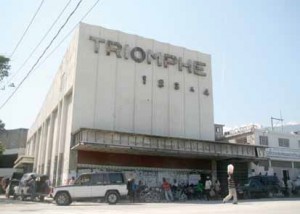 The Haitian government has made public its “broad plan” to build the administrative heart of downtown Port au Prince, a scheme that is, in sum and substance, essentially what Harry Adam told me for my Guardian Cities piece back in January. Click here to read the story.

But the most interesting revelation of all was the promise of a re-built movie theatre – the Triomphe – by July. I’m not sure I believe the timeline but it’s certainly true that red metal walls currently screen off both the Triomphe and the Rex in the heart of Port au Prince – a sign of a coming transformation.

A cinema hall would be yet another step on the road that would take the Haitian capital back to normality. Four years on from the goudou-goudou, the quake. And decades of political instability. It’s the timeline that’s up in the air.