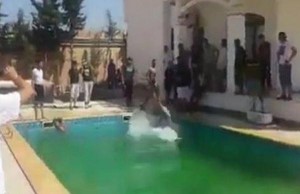 Diplopundit, the anonymous blogger who monitors the triumphs and travails (mostly the latter) of American diplomacy worldwide offers some truly remarkable pictures of a “pool party” by Dawn of Libya militants cavorting in the US Embassy Tripoli’s residential annex.

Click here to see the photos. Hard to believe isn’t it?

Not least that the US Embassy’s housing complex hasn’t been properly secured by now, five weeks after the State Department suspended all embassy operations in Libya and evacuated staff overland to Tunisia? US Ambassador to Libya, Deborah Jones, is now doing her job from Malta.

Diplopundit writes that the good news is that this militia apparently wrestled the compound from a rival group and neither set the compound on fire, which has to be reassuring in a way, considering the excesses of September 2012.

But the bad news is that this form of “securing” of US government property is a form of revenge for US airstrikes.

Ambassador Jones herself has apparently asked the key question: “Who told these guys to “safeguard” a U.S. diplomatic property?  Did they bring their own whiskey to the pool party?”

She spoke into the echoing ether.