What’s next for Haitian tourism? An expensive London promotion office? 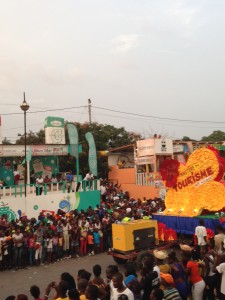 Now that Haiti has its first foreign office of tourism promotion – it’s in Santo Domingo, next door – expect more of the same around the world.

Next stop possibly London? Then, Paris?

Back in June, as I travelled back from Cap Haitien to Port au Prince, I heard some unmistakably English voices at the airport.

“Are you tourists?” I asked curiously.

“No, we’re journalists,” the group replied.

Turned out they were a clutch of writers – for The Daily Telegraph, Kreol magazine and assorted trade journals in the UK. They were being shepherded around Haiti by a Sri Lankan-Haitian hired in London by the Haitian government to ‘sell’ the idea of Haiti to the wider world.

Articulate and self-assured, Jean Marc Flambert, a tourism professional with his own London-headquartered company, seemed to have his ideas well worked out. He planned to get the French to come to their former colony and see the truth of the canard spread by the Haitian diaspora in France. (“They always say they don’t want to visit Haiti because it’s so bad,” he explained sotto voce. “It’s so off-putting, the minute you get in a cab and it’s a Haitian driver and you hear him say that.”)

He said he had already tapped the Germans and Der Spiegel was doing a piece. (I’m not sure if this is the one he meant, but if so, it was probably a mixed blessing: A Damned Paradise: Does Haiti Need Tourism? Or Does It Need Justice? Click here to read the article).

But, as is now obvious from the output in the British press in July, Mr Flambert’s efforts paid off a great deal better with the UK lot. The ones I ran into at Cap Haitien airport. Ian Thomson wrote a sparkling, evocative piece about Haiti (though it did rather stress his book ‘Bonjour Blanc’) in The Daily Telegraph. Kreol magazine raved in a way that some might regard as OTT.

A Haitian tourism promotion office in London sounds like the logical next step. I mean a proper, big-bucks, one. Not a desk in the Haitian ‘mission’ in London.

So it sounds like a logical next step. As also a great waste of government money by a country that’s so desperately poor, there is barely any way to sum it up other than a deep, dark-souled desperation.