CEO, Afghanistan! Is this a ‘real country or just acting like one’? 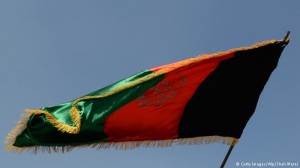 Any friend of Afghanistan must fear for its future. It is to have a CEO, akin to a Wall Street for-profit organization. The new CEO will have authority on a par with Afghanistan’s new president, whose election “win” was announced on Sunday sans any mention of margin of victory, or voter turnout, three months after the poll.

The wrangling presidential candidates – soon-to-be-president Ashraf Ghani and Abdullah Abdullah – signed the power-sharing deal without a smile or any sign of bonhomie, an indication perhaps of the grim battles that lie ahead. 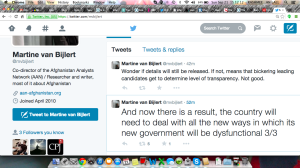 Unsurprisingly, Martine van Bijlert @mvbijlert, co-director of the Afghanistan Analysts Network, tweeted despairingly (see screenshot) soon after the deal was signed: “And now there is a result, the country will need to deal with all the new ways in which its new government will be dysfunctional”.

Unless, hope triumphs over experience, this is a rather dismal end to a remarkable chapter in Afghan history – its hopeful tryst with the ballot box; the remarkably trouble-free election process; the determination to turn the corner and stand proud and tall among free nations.

It reminded me a little of the Afghan bureaucrat, Mr Khayber Ahmad’s genuflections on the state of his country in ‘The Pomegranate Peace’: “Afghanistan, at the moment, is not a real country, it is an acting country. It is pretending to be normal and it suits the foreigners to join in the charade.”