Only in London Town: Would N Korean embassy have an art exhibition 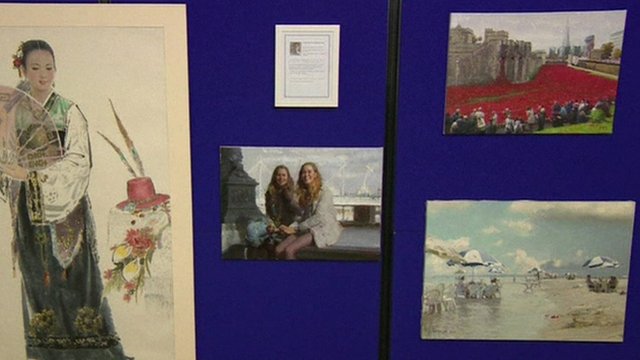 It started Tuesday, November 4, and will run till Friday, this extraordinary attempt to exert North Korea’s soft power by laying on an art exhibition at its London embassy. Read Hamish Macdonald’s preview piece here. The exhibition is free and allows members of the (curious) public and nosy journalists into the unseen premises of DPRK’s London embassy (in the unfashionable, far western suburbs) for the very first time.

According to the original version of Mr Macdonald’s piece on NK news, three “merited artists” and one mere “oil painter” have spent some time here in London.

The artists, all of whom from North Korea’s elite Mansudae studio, were apparently specially chosen by Kim Jong-un, the Supreme Leader, to provide portraits of him and his family. The studio employs 4,000 artists and they spend their time churning out most of North Korea’s shiny, happy artworks. These include scenic landscapes, oils that show astonishingly brilliant flowers and posters that drum home the socialist message. Here in London says The Daily Telegraph, they artists have been observing London scenes. “Having never visited the UK before, they took in the Thames, Trafalgar Square, Covent Garden and the National Gallery – sketching and taking photos as they went.”

One of the results of this cultural immersion, as the BBC’s Arts Correspondent Vincent Dowd found out on Tuesday, was a painting inspired by the sea of ceramic poppies on display at the Tower of London to represent British military fatalities during World War I.

Charles Scanlon, Asia-Pacific editor of the BBC, said that when he visited the exhibition, he found the North Korean ambassador “very effusive”.

All of which suggests a sudden need to connect with the wider world. Why else would Pyongyang have launched this attempt at cross-cultural communication? It’s unlikely to do much for brand-building.

Even so, David Heather, the show’s “curator”, told the folk assembled at the embassy, the hope was that people “leave their preconceived notions, prejudice and politics at the door.”