Was Pope Francis sexist, ageist and lookist in his Strasbourg speech? 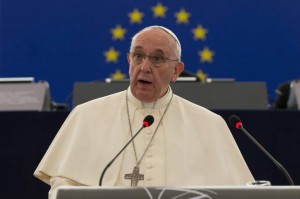 It sounds incredibly rude but is the Pope becoming more platitudinous by the day? Is it just me, or did Pope Francis make some really rather unnecessary remarks when he addressed the European parliament in Strasbourg on November 25?

It was only to be expected that this pontiff would raise the issue of asylum-seekers and refugees to Europe. He is leading the attempt to refocus the church on the poor and last year, he visited the Italian island of Lampedusa, which is close to the African coast and consequently a target for the desperate. So it was valid for the Pope to criticize the “self-interest” of individual European countries, which he said obstructed a coherent, effective policy to deal with refugees and asylum seekers.

But he said so much more that seemed so unnecessary.

What was the point in describing Europe as a haggard grandmother, no longer fertile and vibrant? (Worse, is that ageist, sexist and lookist?) Of lamenting the “loneliness” setting into Europe? Of damning its exaggerated concern for trade and commerce?

It’s fine to take potshots at Europe, which is so insulated by self-absorption it doesn’t really care, but even a Pope should keep his zingers focused, preferably on matters of heart and soul.