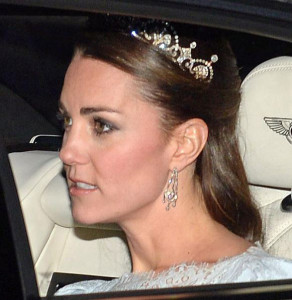 If Kate Middleton were a Disney princess … writes Belinda Luscombe in TIME, there would be a good film to be made out of her desire to attend her old college, St. Andrews’ 600th anniversary in New York City.

Well, she isn’t a Disney princess but a real one by marriage and there’s enough TV footage of that NYC visit – which ends today – to make a film.

What’s that all about?

It’s hard to say other than the fact that the Cambridges seem perfect for an anodyne royal reality show. They keep the script fresh by adding babies by the year, they’ll be around for years and they have to amuse enough to seem relevant.

The perks of their job (if it can be called a job) are pretty good – lots of breathless adulation, acres of approving adjectives and luxuries of every sort.

In NYC, the Duchess of Cambridge and her husband (if she were black, William might be called her ‘babyfather’) stayed at a particularly wonderful hotel, the Carlyle on Upper Madison Avenue.

As has often been written, this was where William’s mother, Diana often hung out and President John F. Kennedy maintained a suite in its towers. His son, John-John, John F. Kennedy Jr., ate his final breakfast at the Carlyle before he piloted that fatal flight.

The Carlyle has to be one of the swankiest addresses in a swish town. That’s got to be enough for any princess, Disney or otherwise.