If there’s one thing you read about #charliehebdo and its cover, this is it 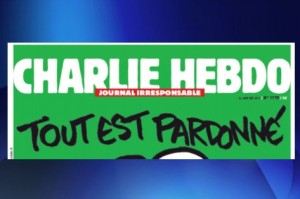 If there’s one thing you read about the Charlie Hebdo attacks and the aftermath – the confused solidarity, the caustic scorn at its new cover – it has to be Hugh Schofield. Click here to read his FOOC, as we used to call the more personalised ‘From Our Own Correspondent’ dispatch, over at the BBC.

Mr Schofield is the BBC’s correspondent in Paris, as senior as they come and as seasoned as one would expect.

The link above is to the written version of his radio FOOC.

I heard him, his voice was heavy with sorrow as he recounted the story of his first brush with Charlie Hebdo’s “obscene political cartoons” and how far the world had moved from the 1970s.

That was when he first saw the ribald drawings while on a family camping holiday in the middle of France.

They were red meat, he recalls. “There’d been some demos outside a nuclear plant that was being built and a protester had died in clashes with police. I have a clear recollection of the front page: (of Charlie Hebdo): the ultimate caricature of a brutish French riot-cop, a grinning bovine Uruk-Hai; and in his hand the blood-dripping head of a long-haired hippy.

“A nerdy teenager at the time and distinctly damp behind the ears, I remember thinking: we don’t get much of that back home!

“But it was vaguely stirring. What audacity! The image was so grotesquely exaggerated that you know the message lay deeper.”

The reason for the deep regret that tinges Mr Schofield’s memories of the moment becomes clearer as the piece progresses.

He says he misses that yesterday, a time when it was clear there was “a difference between mockery and persecution; that words and pictures are only just that; and that part of the deal is that we rise above offence – yes, even when it’s towards our religion.”

He goes on to say: “I miss the world of the anarchic 70s when the worst that could happen when you showed a copulating Christ figure was a letter in Le Figaro from ‘outraged’ from Aix-les-Bains. Now you die.”

That has to be enough to make anyone weep.