Travellers all, let’s celebrate 2015 as the year of the plug 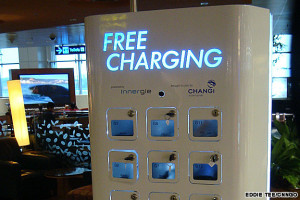 The new year is exactly a month old so perhaps it’s time to celebrate its specialness – as the year of the plug. That’s what The Economist’s Gulliver suggested not too long ago.

I’m with him. It really “is the simple things that count” – well-positioned and plentiful plug points in public spaces; sockets that will take disparate types of plug. Travellers everywhere can only celebrate news that the tourism sector is taking this problem seriously.

As Gulliver explains, a PR firm that represents hotel designers emailed to say that the “prevalent trend” for 2015 will be that “instead of businessmen having to wrestle for power outlets in the lobby with Wi-Fi capabilities, they’ll find more power outlets available than ever before.”

Meanwhile, of course, American Airlines is adding more plug points to its planes and lounges and British train operators will also have more of the same.