Will 1st LGBT envoy mean more people will see US as dedicated to human rights? 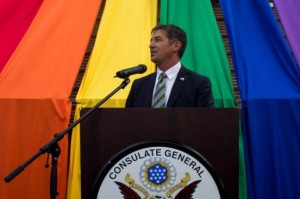 The US now has its first envoy promoting equality for lesbian, gay, bisexual and transgender people in countries where they are discriminated against.

The first, of course, on the principle that it’s always good to shine the light in dark corners, represent those who aren’t or can’t be and generally be the beacon for rights-based action around the world.

So, the lucky pioneer on this front is Randy Berry, currently consul general in Amsterdam. He will be the first US special envoy for LGBT rights.

“We looked far and wide to find the right American official for this important assignment. Randy’s a leader. He’s a motivator. But most importantly for this effort, he’s got vision,” secretary of state John Kerry said in a statement.

According to the Human Rights Campaign, the new appointment “sends a message that the United States will remain on the forefront of  protecting the human rights of LGBT people around the world”.

Do you think it will persuade the world a lot more about America’s championship of rights (over self-interest)?