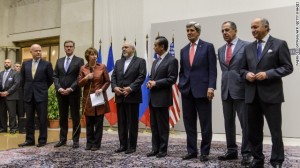 What does the deal with Iran really mean? Over at Quartz, Bobby Ghosh says “the world can now look forward to two petro-states run by religious extremists with international ambitions for their sectarian agendas—and unlimited resources with which to pursue them.”

For, Iran can now seek parity with Saudi Arabia.

But, sanctions meant it could not hope to get into lockstep with Saudi Arabia and now it may try.

Iran is strategically located, has an 80 million-strong population and an annual Gross Domestic Product of 1 trillion dollars. Though Saudi Arabia’s GDP is higher, its population (excluding the 30 per cent expatriates) is relatively small (around 19 million). And Iran is said to be quite a bit further ahead educationally and technologically. Most observers would agree that Iran is the more powerful country compared to Saudi Arabia poised for regional hegemon status in the Middle East. Theoretically, if a military conflict were to break out between the two, the odds would overwhelmingly favor Iran, regarding who would be the victor.

So there would be a Shia country, controlling a large oil-rich country vs a Sunni one ditto.