Key lessons for Nepal from post-quake Haiti, but will anyone listen? 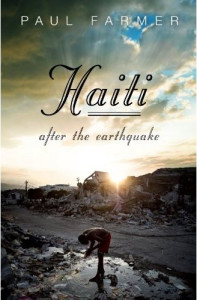 “The Interim Haiti Recovery Commission needed to be swift and nimble,” writes American anthropologist, physician, good Samaritan and Haiti-enthusiast Paul Farmer about how things needed to be right after the January 12, 2010 earthquake.

“…the rules of the road for development assistance needed to be re-written, not to favour contractors and middlemen and trauma vultures, but to favour victims of the quake.”

It didn’t happen and one fears much the same for Nepal after Saturday’s devastating earthquake. Chances are that a shocked world will dig deep into its pocket and stump up what it can to help rebuild Nepal. Just as happened with Haiti, money will flood in. (It’s estimated, as Dr Farmer points out in his book ‘Haiti after the earthquake’, that “50 per cent of American households contributed to earthquake relief. And families across Europe, including the UK and generous Ireland, responded with significant sums too. Just as no previous natural disaster had wreaked such havoc in such a crowded space, neither had one promoted such an outpouring of solidarity”.)

Where did it all go? And is there the risk of something similar happening with Nepal?

I may be wrong but I think it’s unlikely. The scale of the devastation that was almost immediately apparent in crowded Port au Prince may not be clear for a while in Nepal, which has remote communities that may have been affected – or wiped out – without anyone ever getting to know.

Second, I think charitable people will be more wary of the whole aid and reconstruction industry, with Haiti being the cautionary story of how not to build and waste money.

Third, it’s possible that the lessons of Haiti may be somewhat at the front of everyone’s minds – using nimble NGOs, engaging the population in vast public works projects that provide jobs, money and a sense of being stakeholders in rebuilding their country.

The cynical side of me suggests that the third possibility won’t come to pass. I fervently hope I’m wrong.