Ban the soapbox in the US, but leave free speech alone 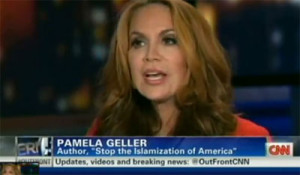 The law can’t prevent every sort of radicalisation, merely punish it. Sometimes it can’t even do that. The problem with the kind of radical bigotry that spawned a Prophet Mohammed caricature contest in Texas is that it is perfectly legal. It is impossible to prevent or punish. Freedom of speech is an article of faith in America. That includes the freedom to impugn and insult. If an act of free expression ends, like that first annual Mohammad Art Exhibit and Contest in Texas, in a shoot-out, the death of the two gunmen and heightened community tension, so be it, according to American law.

Pamela Geller and her racist Islamophobic organisation, which misleadingly sports the star-spangled title the American Freedom Defense Initiative, organised the cartoon contest. They are extremists driven by their misperception of Muslim intolerance and US dominance. Until now, Ms Geller was best known for campaigning against the construction of a Muslim community centre near Ground Zero. More recently, she sued New York’s transit authority for denying her the right to place Islamophobic ads on subway stations. She is on a crusade and its chief weapon is fear.

Though only basic information has yet been made public about Elton Simpson and Nadir Hamid Soofi, who opened fire at Ms Geller’s cartoon contest, they appear to have been willing to take the extreme step of countering intolerance with violence. Chances are that they died before they could execute a massacre. Many people were milling about; Simpson and Soofi were wearing body armour and had assault rifles. ISIL has opportunistically taken credit for the attack but it remains unclear what relationship – if any – Simpson and Soofi had with the group.

Either way, their violent intolerance cannot be condoned. Nothing, not even a deliberately provocative cartoon contest, hate-filled speech, or words that lampoon the sacred, nothing can ever be so offensive it should be punishable by death.

And yet Ms Geller and her tribe of hateful demagogues should surely not have licence either? Consider her reaction after the Texas incident. She didn’t call for dialogue or for greater understanding. She went on Fox News and called it a war. She had the right to say it – American free speech and all that – but it was clear that she would continue to dangerously poke and prod America’s Muslim community in an attempt to encourage radicals to do their worst. Thereby, she makes real the stereotype that she continually parades as the “monster” in the American melting pot, lamenting that Muslims have become a “special class” in America that no one is allowed to offend.

Short of constitutional change, which is entirely unlikely, how to neutralise this radicalised army of fear-mongering crusaders? Something must be done because the grim, unsmiling reality of the post-9/11 years in small-town America is fear of the “other” and mostly Muslims. In April, a YouGov poll found that 55 per cent of Americans had either a somewhat or very unfavourable view of Islam, though few seemed to base those judgments on knowledge of or on relationships with Muslims. This follows a pattern. A 2010 ABC News poll found that 49 per cent of Americans had a negative view of Islam, compared with just 39 per cent in 2002. It is a measure of the to-the-barricades spirit created by this fear that since 2013, 16 US states have introduced legislation to ban or restrict Islamic law even though it is a non-existent threat.

As I have found in small town America, not least the picturesque mountain community where I had a home a couple of hours from Washington DC, some of the most popular jokes are also the most fearful. They revolve around Muslim mothers and their “terrorist” offspring. In one, the punchline has a woman sighing “they blow up so fast”, a slanderous parody of every mother’s lament that children grow up too quickly.

This is the constituency addressed by Ms Geller and her group and it matters. As the cliché goes, American politics may live in the cities and suburbs but it dreams in small towns.

So what, if anything, is to be done? The fearmongers have the law on their side and, as the mayor of Garland said of Ms Geller’s cartoon contest, the city itself could not have banned the event, but the school district that owned the venue where it was held could have refused the booking.

There is a case for local pragmatism in the interests of community cohesion, something that was illustrated by Lyon in France. Seven years ago, Lyon council became the first in France to introduce a “secular menu” in schools. Under France’s secular doctrine of laicité it couldn’t have halal meals for its Muslim schoolchildren even though 300,000 Muslims (19 per cent of the population) lived in the Rhone departement of which Lyon is the capital. To do so would have been illegal at worst, or appeasement at best, according to people like Ms Geller. But a secular menu with its meatless alternative addressed the fact that half the pupils in Lyon schools were skipping lunch because there was no halal (or vegetarian) option.

Local pragmatism then, shorn of high-profile posturing between the authorities, Muslim groups and the likes of Ms Geller may be the answer.

Freedom of speech is guaranteed, but local bodies are not legally required to provide a soapbox. They can just say no.