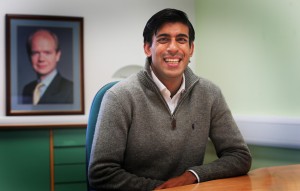 Somewhat unnoticed in the hubbub of the British election, has been the Conservative Party’s sincere attempt to remake politics – in a less racist mould.

It is to David Cameron’s credit that he forced reluctant local parties to pick, for instance, Rishi Sunak, the grandson of Hindu immigrants to the UK and very brown, as parliamentary candidate in as safe a seat as Richmond. And now he’s their MP.

Richmond is one of the safest Conservative seats in Britain – it’s voted Conservative for 105 years. Accordingly, it was a sneaky but very good idea to bring in ethnic minority candidates via safe seats – not in marginals, the iffy constituencies that could go either way. But it can be a testing business.

The experiment led to an outpouring from the Yorkshire Dales of euphemistic racism, as was evident in this Politico report. Ben Judah captured it excellently. Mr Judah has a slightly unorthodox history himself: “My family, ancestrally from the Middle East, had two decades before won a court-case in Imperial India to be re-classified by the British from ‘native’ to ‘white’,” he writes.

And he describes the language of racism against Rishi Sunak very well, in a county “that is over 95 per cent white, with only 122 ethnic South Asians reported living here.”

Mr Sunak incidentally is a hedge fund millionaire, formerly of a think-tank and son-in-law of Infosys’s N.R. Narayana Murthy.

He was born in Britain. So were his parents. He was picked to replace William Hague as Conservative MP for Richmond. It’s a place that Mr Judah captured in a sentence:  “the root of the Yorkshire personality: cattle farmers in the dales, staring at their herds in the rain.”

Mr Sunak didn’t go down well there and this was about something more than his being a ‘townie’ and a non-Yorkshireman.

“Rishi doesn’t really fit in round here,” one farmer told the journalist.

Another acknowledged that “Rishi is a very, very nice man” but added, “I’ll tell ya’ straight, it’s a pity he’s black as there’s many it might not suit.”

A third said, “He won’t understand the life up here…it’s a different world.”

There was lots of euphemistic racism:

“That MP he’ll be doing curry night every night.”

As David Shih, an English professor writes in his blog, “the textual path between something and its social meaning” is particularly interesting when it comes to racism. He points out that “race relations” is often used as a euphemism for “racism” on Google News or similar sites.

No one wants to say that “racism is worse under Obama” though that’s the truth of the matter.

When Mr Sunak was said to “not fit in”, that was racism plain and simple.