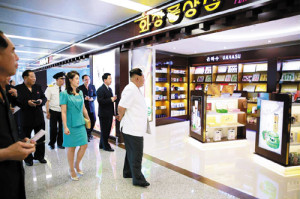 Take a good look at the photograph on the left. That’s North Korean leader Kim Jong Un visiting a cosmetics shop at the shiny new terminal at Pyongyang Sunan International Airport. The woman in the green dress suit is his wife, Ri Sol-ju.

North Korea’s first couple toured the terminal pretty thoroughy, allegedly even stopping by a wine bar and checking out the comfortable seating in the departure lounge. In the photos put out by state media, everything looks shiny and unused – and vast and empty. Mr Kim looks like a wind-up toy though an absurdly large one with an extraordinary hair cut that gets more bizarre by the season.

Was he really at the terminal? Is there really a new terminal at all?

It can be hard to tell with all the determined pretence that Pyongyang makes of glitz, glamour, prosperity, peace and plenty (and then, weirdly the recent announcement that the country is facing its worst drought in 100 years) .

But there’s one giveaway that indicates Mr Kim was really photographed this year: his expanding girth. With every year as leader and with every successive big propaganda photoshoot, he seems fatter – a sign of his intense boredom perhaps? He’s been stuck in his country since taking over from his father, not travelling abroad or doing much of anything as far as anyone can tell. Boredom can make you eat a lot.