Iran talks: What journos do when a story endlessly doesn’t happen 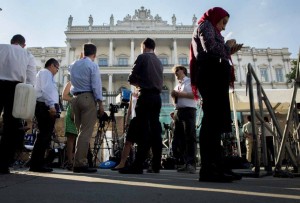 Today’s supposed to be the finally final day of the deal – yes, the one with endlessly broken deadlines as Iran and the P5+1 negotiated Iran’s nuclear programme.

The delay left journalists in a dilemma and at a loose end. “Iran talks: How to cover a story that keeps not happening”, ran the headline in The Washington Post. That’s really rather clever and captures perfectly the dilemma of news outlets – and their journalists on the ground in Vienna – as they covered the ever-lengthening negotiations.

The usual journo-pack response to a story that continues to be on simmer, never coming to the boil is to start to interview each other. And tweet about non-happenings, such as The Washington Post’s Carol Morello’s photo of a hotel notice that the American delegation’s booking was being extended; another’s photo of the lime, mint, ice, water, diet Pepsi she was drinking in Vienna’s sweltering heat.

And then there was an Iranian journalist’s desperate attempt to make the news because none would happen – he went around polling other journalists on when they thought the talks would end.

Nothing less would do for a story that keeps not happening – over and over.