I say jalebi, Tunisia says z’labia. Could this Indian sweet really be Levantine?

It was India’s ambassador in Tunisia, the charming, erudite and variously talented Nagma Malik who reminded me of the tangled mystery that is the origins of the jalebi. 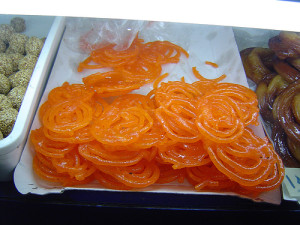 For those who know it, the jalebi is a fried Indian circle of dough dipped in syrup. It is best eaten hot. And in large quantities.

The jalebi is said to have been born as the zalabia somewhere in the Middle East, and travelled to India as is the way of such things. But the Indian ambassador says she thinks it might have started life in Turkey and then arrived in Tunisia long ago, as the z’labia. 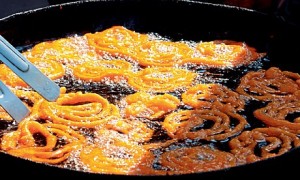 She described how riveted she was to see the z’labia that became available in the Tunisian capital in the month of Ramadan. “There were these men who came into Tunis from other places and made them, just in that one month,” she said, adding that she thought they were probably the original jalebi.

It reminded me of Vir Sanghvi’s article on the jalebi’s origins not too long ago. Unsurprisingly, he cited Dileep Padgaonkar on the subject. Dileep, he said, “checked The Oxford Companion to Food and found that the Iranian jalebi is called the zulubiya and distributed to the poor during Ramzan. In Lebanon, the shape differs but it is basically the same sweet that goes under under the name of zellabiya. In Tunisia it is called z’labia and in much of Arabia it is called zalabiya.”

But he went on to add the opinion of “India’s best food historian, the late KT Achaya who traced the jalebi to South India around six centuries ago. And Dileep quotes a seminal paper by the Indologist PK Gode from Pune’s Bhandarkar Institute written in 1943 in which Gode found a Sanskrit verse which refers to jalebis in a Jain text composed in 1450 AD.” (Click here to read Vir’s piece.)

No one knows for sure, but here, for what it’s worth, is another theory. Could the jalebi originally be a Levantine indulgence?

The doubters would probably say that the only thing it  proves anything beyond doubt is that the jalebi, zellabiya, z’labia is very more-ish.

(Next week: The chapati is everywhere in Tunisia but no one knows how or why)