No one is able to accurately say how the chapati has come to be one of Tunisia’s favourite street foods.

Or when it arrived in this bit of north Africa.

Or who brought it?

I’ve heard someone insist that the chapati Tunisienne began life in Sousse, an hour-and-a-bit from the capital Tunis, but he belonged to that city and I fear this may be an apocryphal account.

Somewhat perhaps like the multiple, multi-sited claims to the birth of Chicken Tikka Masala in Britain.

Anyway, I happened to mention the Tunisian chapati (pronounced sha-pa-tee in this former French colony) to the Indian ambassador here. Nagma Malik expressed surprise at first and then recalled hearing about it but she seemed to think “chapati” had Turkish origins, which confused me somewhat.

According to most accounts, “chapatti” is a Persian word. 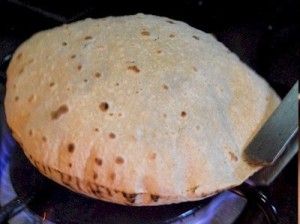 The blog Chapati Mystery offers the following intelligence, quoting [Abdul Hansvi’s] ‘Gharaib al-lughat’, which describes the chapati as a “thin bread cooked on a pan with the hand.” Chapat in Hindi, is of course,  “slap” and as those of us who have made chapatis know, there is a lot of firm but gentle slapping when forming each roti (the other word for chapati). Click here for the Chapati Mystery reference to the origins of the unleavened bread common throughout South Asia.

The 16th century Ain-i-Akbari, which detailed life and governance in Akbar’s empire, also refers to the chapati, according to the English translation by Heinrich Blochmann and Colonel Henry Sullivan Jarrett. Click here for Ain-i-Akbari’s musings titled “Of Bread”, which are as follows:

“This belongs, properly speaking, to the preceding chapter. Bread is made in the pantry. There is a large kind, baked in an oven, made of 10 s. flour; 5 s. milk; 1½ s. g’hí; ¼ s. salt. They make also smaller ones. The thin kind is baked on an iron plate. One sér will give fifteen, or even more. There are various ways of making it: one kind is called chapátí, which is sometimes made of khushkah; it tastes very well, when served hot. For the bread used at court, one man of wheat is made to yield ½ m. of fine flour; 2 s. coarsely pounded flour; and the rest bran; if this degree of fineness be not required, the proportions are altered.”

The chapati Tunisienne is a versatile, filling and remarkable creation.

It can, as this Tunisian blog shows, be a roll comprising cheese and harissa.

It can have Tunisians’ choice of filling: tuna. Or eggs, which are also hugely popular here. Or be served with lamb, mutton or chicken, garnished with various vegetables and a garlicky dressing.

Howsoever it came, the chapati is a firm favourite in Tunisia.