Why Commander-in-Chief Obama is leaving his troops in Afghanistan 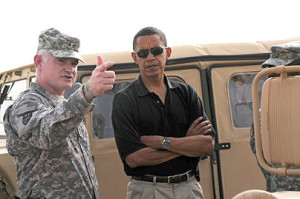 One has to feel for Barack Obama, Nobel Peace Prize winner, a man who once described war as an “expression of human folly” and who came into office determined to bring home American troops, close Guantanamo Bay and end the longest war.

Now, the Obama administration has said that US troops will stay on in Afghanistan well into 2017 – nearly 10,000 next year, and then who knows what lies beyond. It means the engagement will remain real and present for America even after this president departs from office in January 2017.

There are two main consequences of this decision:

** for the moment, the embattled Afghan government is heartened, supported and protected

So, why has Mr Obama swallowed his reluctance to keep American servicemen and women in the badlands of Afghanistan? Remember we’re talking about a President who recently dismissed the militaristic drumbeat in Congress as follows: If I listen to my critics, he said, “who holler all the time, we’d be in like seven wars right now. I’m not exaggerating. I can count them.”

Before Mr Obama’s Thursday decision on Afghanistan, Greg Jaffe wrote a rather detailed piece in the Washington Post explaining the protracted discussions on the issue.

The President and his closest foreign policy advisers, he wrote, told military commanders that “keeping as many as 10,000 troops in Afghanistan indefinitely at a cost of as much as $10 billion to $15 billion a year wasn’t politically feasible or financially responsible. There were more pressing domestic priorities that needed money. The country faced bigger threats.”

But then General Martin Dempsey, who was retiring as chairman of the Joint Chiefs of Staff stepped in with a “quick, back-of-the-envelope exercise” that suggested maintaining a counterterrorism force (of roughly 5,000) in Afghanistan to prevent a reemergence of Al Qaeda and discourage ISIL from finding a foothold in the country.

Then Kunduz happened, a deeply troubling loss of territory to the Taliban (even if temporary) and a loss of face for Afghan forces and the government’s attempt to show that it is wholly in charge of the country.

Afghanistan president Ashraf Ghani has continued to plead for US forces to remain. Afghan MP Shukriya Barakzai has said it wasn’t a “choice” so much as “an obligation”.

Unsurprisingly, Mr Obama, who is nothing if not forensic in his understanding of both the detail and the broad sweep of events, understood the complete picture. Even though he sees it in America’s interest to avoid the costly and corrosive continuation of 50 years of military overreach, he is pragmatic enough to know it’s just not fair to the Afghans to leave now.

He’s enough of a realist to realize that the surge – 50,000 troops sent to Afghanistan – and the massive pouring in of civilian officials (3161s, as they are in US government parlance, were recruited by the hundreds to serve in Afghanistan) has not worked. Afghan governance remains a cherished aspiration; the Taliban are prowling around waiting (and able) to capitalize on the slightest weakness.

That said, it was just days ago that Mr Obama said that the lessons he’s taken from America’s interventions in fractured societies “is that unless we can get the parties on the ground to agree to live together in some fashion, then no amount of US military engagement will solve the problem”.

So why commit US troops to Afghanistan for the foreseeable future?

Is it not pointless?

Is it not a form of insanity, to paraphrase James Clapper, Mr Obama’s director of national intelligence? In reference to the US military’s repeated request to slow troop withdrawal from Afghanistan, Mr Clapper reportedly said at a White House meeting, “What’s the definition of insanity? It’s doing something over and over and expecting different results.”

But the Washington (and elsewhere) foreign policy establishment knew that an American exit now might mark the beginning of the end for Afghanistan. From Ryan Crocker, former US ambassador to Afghanistan, to Michele Flournoy who could’ve been Chuck Hagel’s replacement as defence secretary, everyone was unanimous.

The US needed to stay.