Is Narendra Modi a manifestation of the age of unreason? 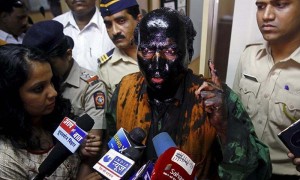 India’s current state – a raging debate about the patriotic legitimacy of dissent – brings to mind EM Forster’s engaging 1938 essay on tolerance. It is a dull virtue, he conceded, being boring and negative because tolerance merely means putting up with people and being able to stand things rather than taking any positive action. Unlike love, “no one has ever written an ode to tolerance or raised a statue to her,” he said, but “this is the sound state of mind we are looking for”.

Forster meant for the great task of reconstruction after the coming war. He was, of course, writing at a time when the world was almost too exciting a place to countenance, what with many invasions and massed armies.

In India today, this applies as well. Tolerance and a sound state of mind are needed. In the past two weeks, things have been almost unbearably exciting and the country is feeling the terrible effects. Emotions are running high over increasingly violent intolerance of the Hindu right wing towards the Muslim community. Many Indians are asking if this bigotry is a sign of a dangerously new fundamentalist order and if it’s all to do with prime minister Narendra Modi.

There is reason for concern. India has been battered by an artificial storm whipped up by disparate right-wing groups seemingly to establish Hindu cultural dominance. This thuggishness has mainly taken two forms. A sudden focus on the consumption of beef, which is generally eschewed by Hindus and discouraged by the Indian constitution for reasons of “scientific agriculture”, but not banned outright in most parts of India. Second, there is the attempt to choke off all contact, particularly cultural ties, with Pakistan, while branding Indians who oppose this tunnel vision as anti-national.

Both campaigns are having the intended effect. After a Muslim man was lynched near Delhi because his village believed he had eaten beef, another was beaten to death at the weekend for cow slaughter. Panchjanya, mouthpiece of the RSS, the hardline ideological fountainhead of the governing BJP, has pronounced on the incidents with a stark interpretation of Hindu sacred texts. The Vedas order the killing of “sinners” who slaughter cows, it wrote. Adding a mild scientific twist, it said the murders should be seen in the light of Isaac Newton’s theory of a natural reaction to any action.

As religious tensions rose, sections of the Hindu right-wing started down a second emotive track. The Shiv Sena, a party strong mainly in the western Indian state of Maharashtra, denounced the invitation extended to former Pakistani foreign minister Khurshid Mahmud Kasuri to visit Mumbai and discuss his new book on foreign policy. The activists doused the Indian journalist who invited Mr Kasuri in black ink. That act of ritual humiliation was endlessly replayed on social media. Soon enough, some traditional India media outlets began to measure out patriotism in every Indian’s stated hatred for Pakistan.

The focus moved to respected public figures such as actor Naseeruddin Shah, who suggested engagement with Pakistan. Shah, 66, was stung enough to speak out in damning terms: “My name is Naseeruddin Shah and I believe that’s why I was targeted. It really pains me to say this. I have never ever been aware of my [Muslim] identity until now”.

The sequence of events has led to dozens of English and regional-language Indian writers returning a top Indian award in a protest against what they call a “climate of intolerance”. Even a succession of child rapes in Delhi is being seen as a sign of unreformed intolerance towards women, though the prominent reporting of sexual violence might actually speak to a new sensitisation.

Is this true? Is Mr Modi the reason that India is facing a new age of unreason? Or is he merely the solid manifestation of a change that happened long ago?

His critics make a valid connection between Mr Modi’s strikingly unremorseful stance about the deaths on his watch of thousands of Muslims in the 2002 Gujarat riots and the fact that he is now at the helm of a new hyper-intolerant India. As prime minister, it is true that he has done little to soothe minority sentiment and bind the wounds of those on the front line of India’s culture wars. Even so, he is a consequence of a steady change in India’s temperament, not the reason for it.

The roots of India’s newly realised and manifested intolerance go back a generation. It was in September 1990 that LK Advani, then leader of Mr Modi’s BJP, began the controversial Ram Rath Yatra to the northern city of Ayodhya to build support for the movement to reclaim the disputed Babri mosque for Hindus.

The goal was to build a temple dedicated to Ram, revered by Hindus, at the site that the cultural nationalists believed to be his place of birth. A mosque, built in the 1520s on the orders of Babur, India’s first Mughal emperor, stood on the site. The journey ended two years later with the mosque razed to the ground by Hindu fundamentalists. In the years since, there has been no apology and little attempt to punish or prevent further excesses.

That was the beginning of India’s age of unreason. Mr Modi is merely the change that India should have expected to see.