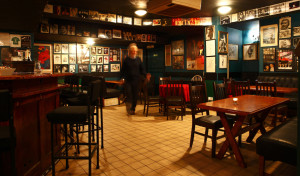 It was fitting that it was at Gerry’s in Soho I properly understood something about Archy (left) and Mehitabel, famous fictional literary lowlifes of the last century.

Fitting because Gerry’s (below left) is a club that attracts, as it says, “a talented group of stage and screen stars”. People, who like Archy, the cockroach imagined by Don Marquis of New York’s Evening Sun newspaper in 1916, might say, “expression is the need of my soul”. (Click here for Marquis’s original column from March 29, 1916, in which Archy first made himself known with those immortal words.)

To those who want to know, Mehitabel is an alley cat who believes she was Cleopatra in a past life.

For Archy had been a poet who wrote in free verse in a previous life. He was reborn as a higher being – a cockroach. In the newspaper office, he was engaged in a dreadful rivalry with another reborn poet, a rat named Freddy, who was so vicious as to eat every bit of verse that Archy laboriously bashed out on Marquis’ typewriter. That was the other engaging thing about Marquis’ characterization of Archy: he humanized his trials. For instance, he described in some detail, the mechanics of Archy’s labours on the typewriter:

“We came into our room earlier than usual in the morning, and discovered a gigantic cockroach jumping about on the keys. He did not see us, and we watched him. He would climb painfully upon the framework of the machine and cast himself with all his force upon a key, head downward, and his weight and the impact of the blow were just sufficient to operate the machine, one slow letter after another. He could not work the capital letters, and he had a great deal of difficulty operating the mechanism that shifts the paper so that a fresh line may be started. We never saw a cockroach work so hard or perspire so freely in all our lives before. After about an hour of this frightfully difficult literary labor he fell to the floor exhausted, and we saw him creep feebly into a nest of the poems which are always there in profusion.”

The image is vivid, very bright still, nearly a 100 years on.

It made me long for a literary lowlife that properly fits the 21st century and can be writing iNotes and synching their labours seamlessly across social media, all the better to tweet at strategic times, possibly post odd Facebook musings and embarrassing instagram photos.