Refugees are good news for Turkey and others 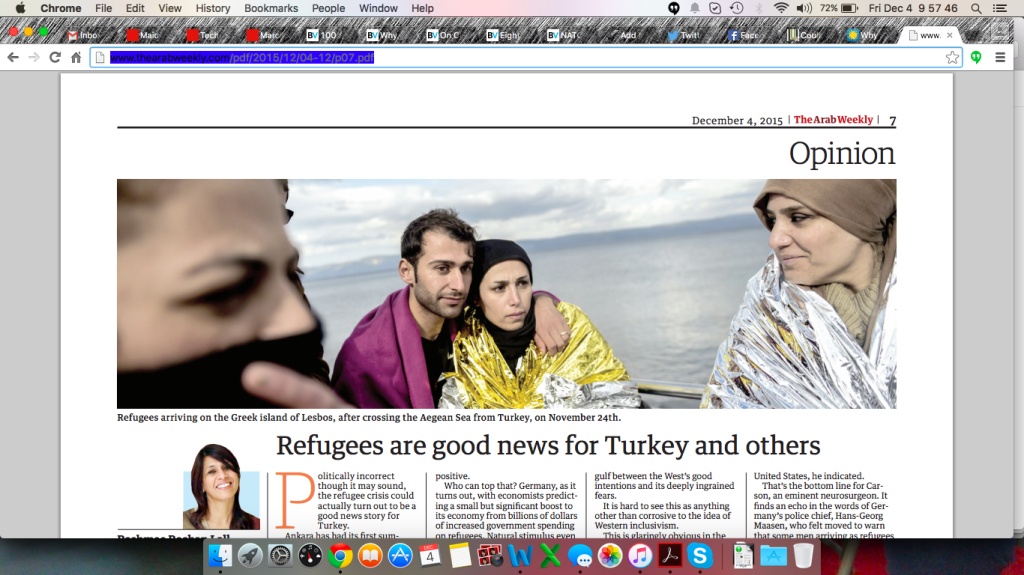 Politically incorrect though it may sound, the refugee crisis could actually turn out to be a good news story for Turkey. Ankara has had its first summit with the European Union in 11 years, apparently a mutually satisfactory meeting that had been called primarily to discuss ways to choke off the migrant flow into Europe at the Turkish border. The meeting saw Ankara loaded with $3.2 billion and encomiums as a “key partner” of the bloc. Crucially, there was the promise to speed up work on Turkey’s stalled EU membership bid and help its citizens get visa-free access to the European Union’s Schengen zone by October 2016.

To this slew of auspicious new beginnings, as Turkish Prime Minister Ahmet Davutoglu described the developments in Brussels, add a recent World Bank study that concluded that the effect on Turkey’s labour market of the 1.8 million Syrian refugees it hosts on its soil has been largely positive.

Who can top that? Germany, as it turns out, with economists predicting a small but significant boost to its economy from billions of dollars of increased government spending on refugees. Natural stimulus even in unnatural situations is revitalising. Clearly, refugees can be good for growth and geopolitical deals as well as a renergising force for burden-sharing among countries.

But logic and economic statistics cannot fundamentally alter the ugly emotionalism of the public and policy debate that is evolving after the Paris attacks. New suspicions that refugees imperil security are taking hold in Europe, the United States and even in Canada. Plans by the newly elected Canadian government of Justin Trudeau to fast-track 25,000 Syrian refugees into the country by the end of February have had to be reworked. Starting on December 1st, Ottawa has prioritised resettlement of whole families, lone women and children from refugee camps in Jordan, Lebanon and Turkey. But unaccompanied men — considered a security risk — won’t be on those planes, a small but pointed omission that underlines the great gulf between the West’s good intentions and its deeply ingrained fears.

It is hard to see this as anything other than corrosive to the idea of Western inclusivism. This is glaringly obvious in the arguments against the entry of Syrian refugees into the United States. At least 28 governors — more than half of American states — have publicly voiced opposition. In Duncan, a tiny town in South Carolina, residents and elected officials had few scruples about pointing out that the federal government could not possibly screen out terrorists from among the refugees. Some congressmen have said they want legislation that could suspend a US refugee programme for Syrians. House Speaker Paul Ryan, R-Wis., has declared that America “cannot let terrorists take advantage of our compassion… better to be safe than to be sorry.” And Republican presidential hopeful Ben Carson, who visited Jordan’s Zaatari refugee camp on November 28th after using an impolitic analogy regarding rabid dogs, argues that Jordan is a “safe” and appropriate holding point. They do not need to get to the United States, he indicated.

That’s the bottom line for Carson, an eminent neurosurgeon. It finds an echo in the words of Germany’s police chief, Hans-Georg Maasen, who felt moved to warn that some men arriving as refugees have fought with the Islamic State (ISIS) and are planning a “combat mission” once they land in Europe.

These are the basic fault lines of an increasingly unpleasant debate and it has enormous implications, however many — and however quickly — Syrian refugees are taken in by the West.

It was well said that God — and everyone — loves a cheerful giver. Grudging acceptance of refugees while shamefully stereotyping them as likely terrorists is hardly an act of brotherly love. If I were a Syrian refugee bound for the West, I would probably feel the injustice of people’s preconceived notions pretty deeply. In the long term, that would not augur well for integration.