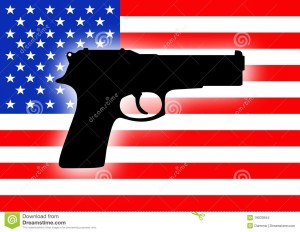 Imagine an alcoholic or a drug addict, who’s been overdosing on his/her poison, is weak and raddled by his affliction, is literally killing themselves.

What would you do? Especially if you were their family or friend?

You’d argue, cajole, threaten to get them to stop. You would lay out the facts of their disease, suggest treatment, offer to accompany them on the journey to recovery.

If everything failed, you would shake your head in pain and bewilderment. Every time you heard of some misadventure that had occurred as a consequence of their addiction, you would be sad, severe – and unsurprised.

That’s how the world seems to feel about America’s gun disease – a chronic case that the patient refuses to get treated. A sad and dispiriting commentary on how one can overdose on something you know will kill you.

The San Bernardino mass shooting had many unusual aspects – the young Muslim married killers with a small baby; the alleged Facebook oath of allegiance to Isil leader Abu Bakr Al Baghdadi – but otherwise, it was sadly the same. Another day, another mass shooting in America.

Titled “Another day, another slaughter,” the paper said it was dumbfounded that so little was being done to reverse the tide of deadly violence and that “for all too many, the response to another mass killing is simply to go out and buy more guns.”

It added, “The rest of the world looks on with utter bewilderment”.

In the seven years since Barack Obama was sworn in as US president, it’s been the 17th time he has had to address the issue of mass gun violence. And it’s the third time in the past two months!

America’s addiction is killing it before our eyes.