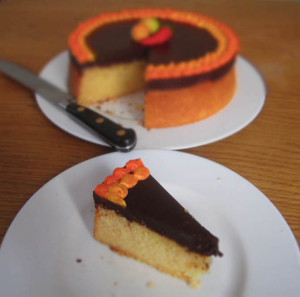 The revival of Tunis cake is a puzzling thing. Not because it’s unpleasant – what’s not to like about chocolate ganache-covered Madeira sponge – but because of its name.

Why does Britain have a cake that takes its name from the Tunisian capital? Is it because of the plentiful availability of ground almonds in Tunis?  Surely not but no one seems very sure about its origins.

However, there is some suggestion it may be Edwardian.

Some say that a Scottish bakery Macfarlane Langs produced commercial Tunis cakes in the 1930s, passing the recipe on to United Biscuits, the new company they formed with McVitie & Price in 1948. Apparently McVitie’s produced a Tunis cake until the mid-1980s and then, as is the way of such things, the cake went the way of other unfashionable foods.

Now it is back in fashion mostly it seems on account of The Great British Bake Off and Mary Berry’s decision to ask the contestants to make it in the third week of December 2013. It was offered as a lighter alternative to the fruit and nut-heavy traditional Christmas Cake, and there are reports of Tunis cake sightings at Tesco, Waitrose, Marks and Spencer and others.