When Donald Tusk did a #DonaldTrump on refugees to Europe 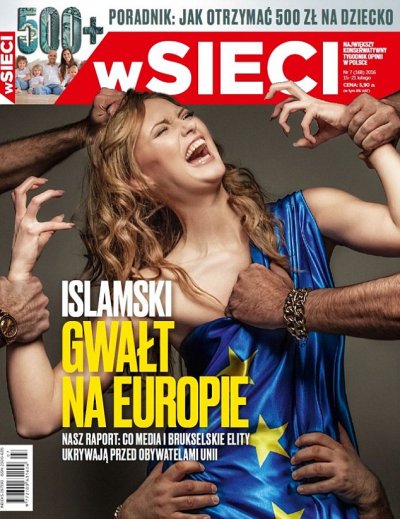 On Thursday, March 3, Donald Tusk, president of the European Council, did a Donald Trump.

He was tough on, to  and about refugees.

But even before Mr Tusk was so Trump-like, there was ‘wSieci’. It too behaved like Mr Trump.

The rather conservative Polish magazine, simply did what Mr Trump has been managing in the US. Saying the unsayable. Not, please note, the unthinkable. Many people think what ‘wSieci’ showed.

What was that all about? It came eight weeks after the incidents in Cologne, when women gathered in the city centre to party on New Year’s Eve later reported being groped and robbed by “gangs” of Arabs and North African men. The news made headlines around the world and similar complaints emerged from other European countries.

It provided far-right Islamophobes such as the Dutch politician Geert Wilders with the nerve to describe the harried Syrians as “testosterone bombs…(bent on committing) sexual terrorism, a sexual jihad.”

This created a powerful negative narrative about refugees, one that has had force from time immemorial. The fear of invaders taking women. Remember Donald Trump’s outrageous assertion that Mexican immigrants were “rapists”?  Indeed, in times of conflict, sexual domination is often seen as a important tool of psychological warfare. Roman philosopher Cicero is said to be one of the first to lay out the “laws of war”, which he said separated the “men” from the “brutes”. Women were regarded as “property”, which was obviously taken by the victor.