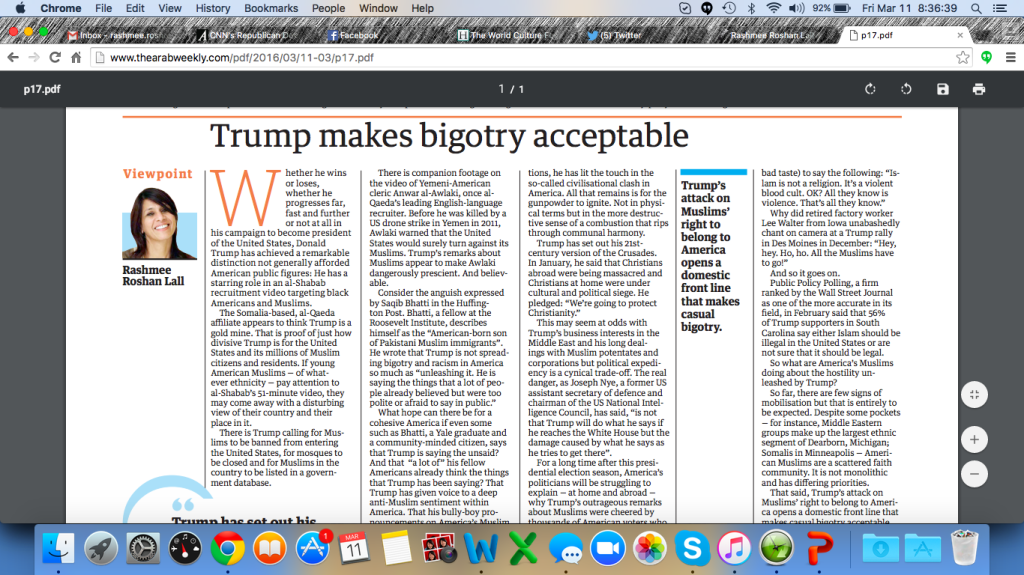 Whether he wins or loses, whether he progresses far, fast and further or not at all in his campaign to become president of the United States, Donald Trump has achieved a remarkable distinction not generally afforded American public figures: He has a starring role in an al-Shabab recruitment video targeting black Americans and Muslims.

The Somalia-based, al-Qaeda affiliate appears to think Trump is a gold mine. That is proof of just how divisive Trump is for the United States and its millions of Muslim citizens and residents. If young American Muslims — of what­ever ethnicity — pay attention to al-Shabab’s 51-minute video, they may come away with a disturbing view of their country and their place in it.

There is Trump calling for Mus­lims to be banned from entering the United States, for mosques to be closed and for Muslims in the country to be listed in a govern­ment database.

There is companion footage on the video of Yemeni-American cleric Anwar al-Awlaki, once al- Qaeda’s leading English-language recruiter. Before he was killed by a US drone strike in Yemen in 2011, Awlaki warned that the United States would surely turn against its Muslims. Trump’s remarks about Muslims appear to make Awlaki dangerously prescient. And believ­able.

Consider the anguish expressed by Saqib Bhatti in the Huffing­ton Post. Bhatti, a fellow at the Roosevelt Institute, describes himself as the “American-born son of Pakistani Muslim immigrants”. He wrote that Trump is not spread­ing bigotry and racism in America so much as “unleashing it. He is saying the things that a lot of peo­ple already believed but were too polite or afraid to say in public.”

What hope can there be for a cohesive America if even some such as Bhatti, a Yale graduate and a community-minded citizen, says that Trump is saying the unsaid? And that “a lot of” his fellow Americans already think the things that Trump has been saying? That Trump has given voice to a deep anti-Muslim sentiment within America. That his bully-boy pro­nouncements on America’s Muslim problem somehow shine a bright light on a deep and unsettling truth, which Bhatti describes as fol­lows: “Deep down many of us have long feared but were afraid to say out loud: We don’t belong here.”

It is clear that whatever happens to Trump and his political aspira­tions, he has lit the touch in the so-called civilisational clash in America. All that remains is for the gunpowder to ignite. Not in physi­cal terms but in the more destruc­tive sense of a combustion that rips through communal harmony.

Trump has set out his 21st-century version of the Crusades. In January, he said that Christians abroad were being massacred and Christians at home were under cultural and political siege. He pledged: “We’re going to protect Christianity.”

This may seem at odds with Trump’s business interests in the Middle East and his long deal­ings with Muslim potentates and corporations but political expedi­ency is a cynical trade-off. The real danger, as Joseph Nye, a former US assistant secretary of defence and chairman of the US National Intel­ligence Council, has said, “is not that Trump will do what he says if he reaches the White House but the damage caused by what he says as he tries to get there”.

For a long time after this presi­dential election season, America’s politicians will be struggling to explain — at home and abroad — why Trump’s outrageous remarks about Muslims were cheered by thousands of American voters who attended his rallies. Why weren’t they shocked? Why didn’t they boo and jeer such unfair stereotyping of an entire religious community?

Why, as CNN has reported, did Hoyt Wood, a 68-year-old military veteran at a Trump rally in South Carolina, have the guts (and the bad taste) to say the following: “Is­lam is not a religion. It’s a violent blood cult. OK? All they know is violence. That’s all they know.”

Why did retired factory worker Lee Walter from Iowa unabashedly chant on camera at a Trump rally in Des Moines in December: “Hey, hey. Ho, ho. All the Muslims have to go!”

And so it goes on.

Public Policy Polling, a firm ranked by the Wall Street Journal as one of the more accurate in its field, in February said that 56% of Trump supporters in South Carolina say either Islam should be illegal in the United States or are not sure that it should be legal.

So what are America’s Muslims doing about the hostility un­leashed by Trump?

So far, there are few signs of mobilisation but that is entirely to be expected. Despite some pockets — for instance, Middle Eastern groups make up the largest ethnic segment of Dearborn, Michigan; Somalis in Minneapolis — Ameri­can Muslims are a scattered faith community. It is not monolithic and has differing priorities.

That said, Trump’s attack on Muslims’ right to belong to Ameri­ca opens a domestic front line that makes casual bigotry acceptable with all the terrible attendant con­sequences on both sides.