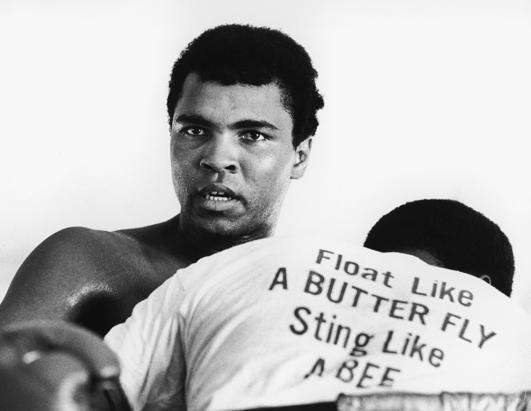 Muhammad Ali, dead and buried, lives on most intensely in Davis Miller’s remarkable true story about how he became friends with the champion one evening at the end of March 1988, the day that he heard he’d been fired from his job. Ali was past the greatest period of his life. Mr Miller hadn’t even started on anything remotely resembling greatness.  Read the story if you can. Here’s a link to ‘My Dinner With Ali’, which was first published in ‘Sport’ magazine in 1989 and went on to feature in ‘Best American Sports Writing of the Century’.

Mr Miller’s story describes his 35-year-old self driving by Ali’s mother’s house in Louisville, Kentucky, seeing the great man’s RV out in front, knocking on the door, having a little chat, then being invited into Mrs Clay’s house.

Mr Miller wound up staying with Ali, his brother Rahaman and Mrs Clay all evening. Then, after the others had gone to bed, he sat in the living room with Ali till late into the night, watching videos, exchanging jokes and reflections on life, truth, God’s will. It was to be a friendship that would last till the end. Just the other day, Davis Miller was on NPR crying gently about his friend and hero, the man who inspired him to go on living not once, but twice. The first time was when he was 11 and his mother had died. The second was that day he heard he’d lost his job and didn’t know how in the world he would make a living and feed his young family.

Anyway, Mr Miller went on to become a well-known writer. His book The Tao of Muhammad Ali was developed into the opera Approaching Ali. He has also written on Bruce Lee.

‘My Dinner With Ali’ was a turning point in his life because it was his first published story.

One of the best bits in the story underlines the essential humility and goodness of Ali.

Ali and Mr Miller discuss the boxing champion’s struggle with Parkinson’s disease. ‘“I know why this has happened,” Ali said. “God is showing me, and showing you”—he pointed his shaking index finger at me and widened his eyes—“that I’m just a man, just like everybody else.”’