In America, pro-ISIS digital content is a crime, pro-gun pronouncements a right

Harvard law professor Noah Feldman asks a deeply troubling question in his Bloomberg View piece. Why should pro-ISIS digital content be considered dangerous to Americans and their society but not pro-gun pronouncements?

Click here to read Professor Feldman’s piece in full. It’s a bit dense but here’s a short rundown on the essential argument.

Apparently, American courts are applying the constitutional rights to cherished freedoms – especially to free speech – differently for advocacy of different kinds of violence.

Those who advocate gun violence are considered less dangerous and less worthy of harsh punishment than people who advocate the views of Al Qaeda or ISIS functionaries.

This becomes clear from two rulings by the same judge – Bruce Selya of the United States Court of Appeals for the First Circuit. The First Circuit is a federal court with appellate jurisdiction over district courts in Maine, Massachusetts, New Hampshire, Puerto Rico and Rhode Island.

Ruling on videos and music made by Puerto Rican singer Neftalí Alvarez-Núñez, the judge rejected the argument that lyrics and footage showing rifles and grenade launchers were an action necessitating harsh punishment. They were an artistic idea and considering the art as part of the sentence violated the artiste’s First Amendment rights.

But the judge had taken a much harder line on much the same thing – digital content – three years ago, in a case that involved support for Al Qaeda.

Tarek Mehanna, who had translated some of Al Qaeda leader Osama Bin Laden’s speeches into English and uploaded them to websites associated with Al Qaeda, was deemed to have provided material support (through speech, artistic/literary action) to a terrorist group designated by the executive branch.

So, to Professor Feldman’s question: “What’s the difference between cultural advocacy of terror and cultural glorification of violence?”

“Glorifying terrorism affects people’s minds the same as the glorification of all other violence. The same standard should apply. Either we protect the advocacy of ideas, or we don’t.” 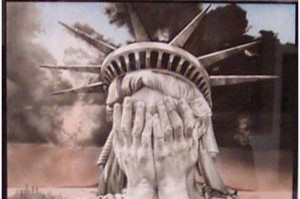