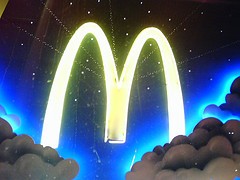 Now that British Airways has followed Air France in resuming direct flights to Tehran, it may be appropriate to update the Golden Arches Theory of Conflict Prevention and its successor, the Dell Theory. Let’s call it the Air Links Theory of Peace and Security. For 2016, that sounds just about right.

The Golden Arches Theory ap­peared in 1996; the Dell a decade later. Both were catchy inventions by New York Times journalist and best-selling author Thomas Friedman. Once upon a time, both theories appeared to clearly and cleverly sum up the state of the world, one that was speeding down the globalisation highway towards a future filled with happy homogenisation, the convergence of opportunities, a single market­place and a shrinking role for the nation state.

No longer. This is the age of populist demagogues, fierce oppo­sition to free trade deals, nativist political rhetoric and the promise of physical and mental walls. It is a world of Donald Trump, Marine Le Pen, Nigel Farage, Brexit and chants of “no TPP”, which is to say US President Barack Obama’s Trans-Pacific Partnership. Both the Golden Arches and the Dell Theory are no longer fit for pur­pose. They are going the way of the dodo.

The Air Links Theory is more pragmatic. It is premised on the assumption that most countries will try to establish ways to reach each other’s capitals — for busi­ness and for pleasure — but that real or perceived security needs may outweigh the prospect of peaceful and profitable interac­tion. That means peace for a time, not peace for all time.

It is totally on point in a year that has seen flight maps change — for good or ill — along with dramatic shifts in foreign policy. The United Kingdom and France have returned to the skies above Tehran, marking the steady thaw in Iran’s relations with the West just more than a year since its landmark nuclear agreement with six world powers. Commercial flights are resuming between the United States and Cuba after more than half-a-century.

Both developments are consid­ered positive for building business and people-to-people ties. The US Department of Transporta­tion estimates that up to 110 daily flights operated by US carriers will start flying to Havana, turning the Caribbean’s largest island into a major holiday destination for Americans.

In the negative column of the balance sheet is the Brexit vote. Technically, it means Britain’s eventual exit from the European Union will also eject it from the historic 2007 open skies agree­ment between the United States and European Union. This would limit transatlantic opportunities, price points and, ultimately, pas­sengers.

But the vote, which was driven by the British people’s desire for an imagined secure zone free of foreign control, foreign influences and too many foreign people, also fits with our updated theory of international relations. For countries sometimes need their comfort blankets, be they in the form of border closures or reneged regional pacts. Real or perceived security needs may take prece­dence over commercial or political gains.

In 2016, it is no longer possible to talk blithely about economics as an almost permanent guarantor against conflict. In 1996, Fried­man was able to propound his Golden Arches Theory as follows: “No two countries that both have a McDonald’s have ever fought a war against each other.” In other words, countries can have McDonald’s, the world’s biggest restaurant chain, only when they have reached a sufficient level of economic prosperity and political stability to make war unattrac­tive to their people. By the time countries get to that level, assured Friedman, their people “don’t like to fight wars; they like to wait in line for burgers”.

At the time, it sounded plausi­ble. That was the year McDonald’s had gone into its 100th country, which meant the golden arches spanned more than half the world’s recognised nation-states. About ten years later, Friedman was back with the Dell Theory, which basically said the same thing, only in terms of manufac­turing and the economic supply chains girdling the world.

But the thesis of an ever-flattening world is misleading. It suggests that interconnected individuals in disparate countries will collaborate and compete in a good-natured sprint towards development and progress. Un­fortunately, the mutually reas­suring presence of McDonald’s outlets did not stop the 2008 war between Russia and Georgia or Russia’s annexation of Crimea. A profusion of Dell-style supply chains has not forced Israel to treat the Palestinians any better or even to comply with international law. If anything, lifting people up from poverty and into the middle classes — China and India cases in point — can make countries more nationalistic and militaristic.

So, could air links between countries reduce the possibility of conflict? Only up to a point. Even though Iran’s president, Has­san Rohani, said it opened “new windows for engagement with the world”, the nuclear deal has its Iranian critics who are opposed to letting in some fresh air.

The world is not flattening; it is still Earth-shaped.