Remember the Obama-Hope poster? Too much world enthusiasm for a US president can be a problem 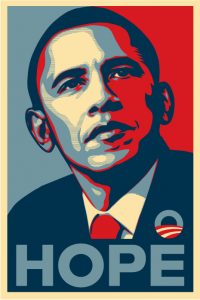 I was amused to read a new poll on how the Middle East and North Africa region (MENA) would vote if it had the right to vote on US Election Day, November 8.

The poll, conducted by the Saudi daily Arab News and British pollster YouGov found that nearly half the respondents would abstain. Forty-seven per cent of the 3,017 people in 18 countries of the MENA region, said they wouldn’t pick either Hillary Clinton or Donald Trump. Of those who would vote, 44 per cent chose Mrs Clinton and just nine per cent picked Mr Trump. YouGov noted the lack of “enthusiasm for either candidate”.

To which I say that’s just fine. A candidate running for US president, as well as a newly elected US president, doesn’t need massive enthusiasm from all over the world. It’s flattering (for the individual in question and for the country that had the good sense to elect them) but a distraction. When Barack Obama was elected president in 2008, we were in India and I remember the way in which people would repeatedly tell my husband, an American diplomat, their hopes for Mr Obama. They expected him to solve everything, everywhere. In Aligarh, north India, a group of university students suggested that Mr Obama owed it to the world to sort out a number of things – else he will have ignored his mandate (of worldwide goodwill).

When we got to Afghanistan and wherever else we went really, there was always a long laundry list for Mr Obama from people who said they believed in him and trusted he would do all the things he should. They behaved as if Mr Obama was their president, not America’s.

It doesn’t take too much deep thinking to know that the inevitable will happen when there is boundless enthusiasm for a leader, someone else’s or your own. President Obama could never have hoped to fulfil the expectations of everyone, everywhere.  It was plain even back then, in 2008-09, that all those eager non-American non-voters would be sorely disappointed.

Too much enthusiasm for a US presidential candidate may be as big a problem as too little. A healthy dose of scepticism about the limits of the politically possible goes a long way.