Unpredictable times ahead after US election 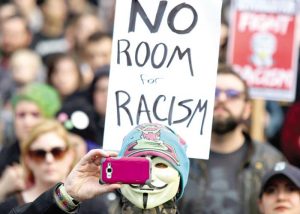 Days after Donald Trump became US president-elect, the Molotov cocktail set off in US and world politics by his controversial candidacy appears destined to take an incendiary, stress-inducing, if slow-motion path.

Trump’s first public utterances after winning the November 8th election were bland and reassur­ing. Surprisingly so, given the crude bigotry and Islamophobia of his stump speeches. There was no mention of his infamous proposed Muslim ban or the recently repur­posed “extreme vetting” of visa applications from “terror-prone” parts of the world. He promised partnership, not conflict. And friendship with all nations that wanted it.

He spoke of worthy objectives, such as building bridges, roads and schools across the United States. He sounded less angry and not quite so unkind — towards Mus­lims, Mexicans, black people and the disabled — as he has in the past 18 months. In fact, he did not mention them at all after a campaign built on slurs, race-baiting and Muslim-bashing.

Does that say something about the Molotov cocktail labelled President Trump that has been lobbed at inclusive diversity, liberal democracy and America’s attitude towards the Middle East and North Africa region where four hot wars are under way?

Without a doubt. Victory can have an emollient effect, even on so brash a temperament as that displayed by America’s incom­ing president but what happens when The Donald, a nickname that caught on after Trump’s first wife referred to him that way in a 1989 magazine article, has to make the following difficult decisions?

Or when he goes toe to toe with Russia’s Vladimir Putin on his robust support for Syrian President Bashar Assad’s murderous regime in Syria?

How does President Trump han­dle Iranian aggressiveness to his stated determination to tear up the nuclear deal?

Will he, as personally promised in September to Israeli Prime Minister Binyamin Netanyahu, move the US embassy from Tel Aviv, thereby recognising Israel’s contested claims that Jerusalem is its “undivided capital”?

What will President Trump do when another lone-wolf terrorist attack occurs on American soil and the perpetrator is identified as a Muslim American, either born in the United States or naturalised? Will he deport everyone natural­ised within the past 30 years to keep one of his campaign pledges: To Make America Safe Again?

No one knows. Trump is that unpredictable gale force wind that sometimes gusts through a po­litical landscape, knocking every policy prediction off course.

The worry is the hope aroused by his win among far-right nativist forces across the Western world. Greece’s Golden Dawn described it as a victory for ethnically “clean” states. France’s Marine Le Pen of the far-right National Front hailed the newly “free” people of America.

The Molotov cocktail has been lit. Will it fizzle mid-arc or burn everything?