Come one, come all, prepare for the end of the Automobile Age 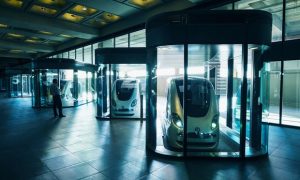 As has happened before, America must imagine the future and then seek to build the infrastructure for it, he says.

As the Age of the Automobile draws to an end, “what kind of infrastructure should underpin that vision? And who should plan, develop, build, finance, and operate the systems?”

Professor Sachs suggests “infrastructure that abides by the triple bottom line of sustainable development.” Which is to say the networks of roads, power, water, and communications should support economic prosperity, social fairness, and environmental sustainability.

That’s a lot to ask but it makes eminent good sense. It’s no contradiction to look ahead to the end of the Automobile Age even as driverless cars become the next big thing. For, driverless cars will mean we each don’t need one, prompting new uses for empty garages, driveways, on-street parking, our very attitude to the four-wheeled self-propelled motor vehicle that started to be seen on the roads from the late 19th century.

In The Guardian last year, Stephen Moss described the changing vision of the city, with residents relying on “on public transport, shared cars and bikes and, above all, on real-time data on their smartphones.” The article quoted Gilles Vesco,  who played a key role in introducing Lyon’s much-imitated Vélo’v bike-sharing scheme a decade ago. The Beyond Cars Age will mean cities with “less pollution, less noise, less stress”, he says.

The change in infrastructure follows the changing way in which we live. Professor Sachs lists the breakthroughs that changed the American way of life – and progress, as follows. The Erie Canal in the early 19th century, which connected the Midwest farm belt with the Port of New York and the eastern seaboard. That was followed by the railroad, which connected the two oceans and the continent in between. And then the Interstate Highway System, for the car.

Now, our Age of Fiber-connectivity demands something else.

It’s best to be thinking on it and preparing.