My question to a tweet-scoffing man I respect: Is Trump really too rich to be corruptible?

Just the other day, a fellow-American whose opinion I respect, scoffed at a story I had tweeted. It was from ‘The Hill’, which covers the minutiae of American politics and political gossip and is widely read by US government officials, lobbyists and others.

The story I tweeted was headlined “Report: Embassy of Kuwait moves major event to Trump’s DC hotel”. Click here to read it.

The person who scoffed at my tweet wrote the following: “The Hill uncritically reprinting story based on single unnamed source saying Trump risked exposure for few thousand $?”

It seemed that The Scoffer, in the 140 characters allowed by Twitter, was really saying the following: Shame on ‘The Hill’ for reprinting a single, anonymous-source story on the Kuwaiti embassy’s decision to move its National Day celebrations from the Four Seasons to Mr Trump’s new hotel in D.C.

To which I say, fair enough. It’s good to have two sources. But in the case of a demonstrable fact – such as a changed hotel booking – you don’t necessarily need a hotel reservation clerk to confirm that xx date is blocked off for the Embassy of Kuwait so long as you’ve established that some other way. Also, no one was suggesting that the President-elect himself wangled a measly deal for an embassy event. But the fact that it came to his hotel is obviously part of foreign diplomats’ attempts to ingratiate themselves with the incoming American administration. Some might argue that this is hardly Mr Trump’s fault. True. But he could distance himself substantially from his businesses so that any attempt to curry favour is doomed to fail.

Anyway, the point of this blog is that The Scoffer asked a very important question. “Why would anyone believe that “Trump risked exposure for few thousand $?”

Why indeed? Isn’t Mr Trump enormously rich? Aren’t his current living quarters in Trump Tower bigger and more gilded than the White House? What possible blandishment, bribe or boon could anyone in the world give so rich a man?

I accept that The Scoffer is a just and fair-minded person who seems inclined to give Donald Trump a chance. Or perhaps he’s an enthusiastic Trump supporter. Or both. Whatever his beliefs – and he’s entitled to them – it’s dismal to think there can be no discussion of any matter to do with Mr Trump’s businesses on the grounds that he is simply too rich to be corruptible.

To those who believe rich people don’t lie, cheat and steal because they don’t need the money, please consider the following:

There are, he said, “lots of instances of increased ethical conduct among upper-class individuals, such as the tremendous philanthropy of Warren Buffett or Bill Gates”.

However, Mr Piff did find a peculiar but particular relationship between unethical behaviour and wealth and status. “You can think of this self-perpetuating cycle, where promotion of self-interest increases status in society, which further increases willingness to behave unethically,” he said. “It may help explain the runaway rise in inequality in the last 50 years, at least in this country (the US).”

Here’s an unrepresentative rundown (I’ve not even started on India, Pakistan and elsewhere) of just a few rich people who were revealed to be highly corruptible. The list only goes to show that you are never too rich to be immune to temptation. That is why there are ethics laws. And that is why they should be observed. N.B.: THIS IS NOT TO SAY MR TRUMP IS CORRUPT, JUST THAT BEING RICH DOESN’T MEAN YOU CANNOT EVER BE CORRUPT. 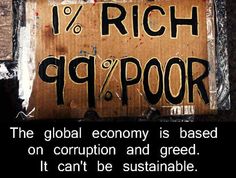