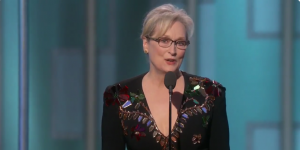 Funnily enough, Meryl Streep’s passionate and powerful words at the Golden Globe illustrated a message that recently came from France.

Even if you don’t much care for former French Prime Minister and presidential hopeful Manuel Valls, his recent observation on art and artists is worth recalling. Mr Valls said that artists are the “watchful observers of our society’s errors”. For, their culture is both indispensable currency and a nation’s truth wealth. It is “what gives us strength, optimism, depth, and therefore, a vision for our country.”

So to Ms Streep’s critique of the one performance this year that “stunned” her. She called out, without using Donald Trump’s name, politically-sanctioned social unkindness. Mr Trump’s mockery of a disabled reporter, she said, “sank its hooks in my heart (because) it was effective and it did its job”.

And she rebuked America’s incoming president in the only way possible for an actor, someone who deals in human emotion: “It kind of broke my heart when I saw it and I still can’t get it out of my head because it wasn’t in a movie, it was real life.”

There you have it. Mr Trump has since dismissed Meryl Streep’s criticism as the usual thing to be expected from an “over-rated” actress who has the bad taste to be a “Hillary lover” and one of those “liberal movie people”. But it is not just liberals who have disabled family and friends and strong views about how they should be treated. Mr Trump’s supporters also have their share of pain and hardship. Mr Trump’s voters also have disabled children, siblings, spouses, parents.

You do not choose your life’s chief woe. It chooses you.

So to Ms Streep’s words about the implications for society and for all of us of Mr Trump’s profound unkindness towards those who cannot fight back:

“This instinct to humiliate, when it’s modeled by someone in the public platform, by someone powerful, it filters down into everyone’s life because it kind of gives permission for other people to do the same thing. Disrespect invites disrespect, violence invites violence. When the powerful use their position to bully others we all lose.”

That includes those who support Mr Trump and those who don’t.

T’was Picasso who said that the artist is a receptacle for emotions that come from all over the place: from the sky, from the earth, from a scrap of paper, from a passing shape, from a spider’s web.

In that sense, Meryl Streep’s words represent more than the caterwauling of “liberal movie people”.

It was a cry from the heart to force us all to remember the essential human dignity of every other.