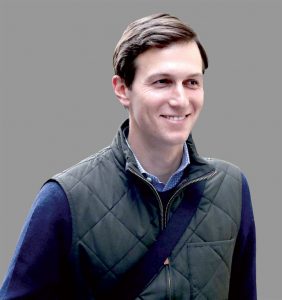 Jared Kushner is to become a senior adviser to the United States’ 45th president, his father-in-law Donald Trump, because he has wasta. That’s Arabic for “clout”, which means who you know rather than what you know or, more impor­tantly, what everyone else knows you know.

So far, what does the world know that Kushner knows?

It knows he is married to the incoming US president’s favour­ite child, Ivanka. That his father-in-law prizes family and loyalty just a notch above his own fabulously good opinion of himself. That Kushner’s grand­mother, Rae Kushner, who was born in present-day Belarus, suffered grievously along with her family at the hands of the Nazis on account of her Jewish faith.

Finally, it is probably fair to assume Kushner knows that being an Orthodox Jew makes him an important, possibly discordant voice on a key conflict in the Middle East. His reflexive sympathies, with the backing of his powerful father-in-law’s administration, could decisively tip the scale on the Israeli-Pales­tinian conflict.

Soon after his election win, Trump declared that Kushner, who has no foreign policy experience and no known record of delicate diplomatic deal-mak­ing, could help “do peace in the Middle East”.

A lot rides on that casual statement. It suggests that America’s next president believes the Israeli-Palestinian peace can be brokered without even the pretence of US impartiality. It indicates that Kushner, who has financially supported Israeli settlement building, will be blandly expected to weigh in on a tricky core issue of the conflict. The settlements were recently declared illegal by the United Nations, to Israel and Trump’s fury.

Trump’s statement also shows that he sees no problem in deploying a partisan envoy to “do peace” in a sensitive region even though the Kushner family has known Israeli Prime Minister Binyamin Netanyahu for years and financially supports the American Israel Public Affairs Committee. It, of course, is committed solely to promoting the US-Israel relationship.

Here is the flip side and it is argued by no less than Richard Haass, president of the Council on Foreign Relations and an experienced diplomat under vari­ous Republican administrations. He recently mused that Kush­ner’s induction as Trump’s special envoy to the Middle East would re-establish “strategic trust” between the United States and Israel. As for the peace process, he said, putting the words into quotes, it does not currently exist, so Kushner can neither break it nor make it.

This is sad but true. However, even if there is no peace process now, the appointment of some­one who could not revive it is its death knell.

Of course, Kushner’s powerful role in his father-in-law’s White House has implications that go beyond the Israeli-Palestinian issue. As Trump’s most trusted and influential adviser — family comes first, after all — he can speak for the American president in a way that incoming Secretary of State Rex Tillerson will probably come to envy.

In a funny way though, Kushner’s induction makes the United States more relatable for coun­tries in the Middle East and North Africa (MENA) region, where family rule is often seen as a guarantor of stability and the bonds of kinship well understood as the strongest badge of author­ity. With Kushner’s rise in an America that hitherto frowned on the blatant privileging of those linked to a president by blood or marriage, a Western superpower appears to be twinning with the exotic East. This is hardly inspirational but it is relatable.

Even so, Trump has been elected US president, not anointed king. One day, he will be out of office and the interrupted rhythms of presidential appoint­ments sans nepotism will resume. Then, Trump and his son-in-law’s historical footprint will be no more than the total sum of good or evil they wrought.