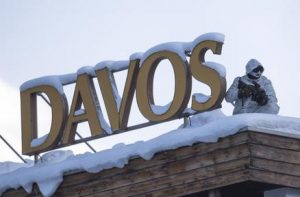 Davos, the annual gathering of globally minded technocratic successful people, has ended and …everything is still the way it was.

Despite the head-shaking about inclusive growth, the caterwauling about populist movements, I never heard a single CEO or political leader declare that they would ensure a fairer system – at home. In their companies, or if you’re British prime minister Theresa May, in your country.

Mrs May was quick to blame the corporate-wallas for people’s anger about being “left behind”, as the cliché goes. But after seven months in the job, she is yet to announce anything vaguely redistributive – say, a corporate social responsibility tax on big successful companies to fund lifelong learning for workers, skills enhancement etc etc. In fact, Mrs May’s chancellor, Philip Hammond, has been threatening the European Union with the idea of Britain becoming a tax haven on the margins of Europe, sucking in businesses and investment and woozily raising its cocktail umbrella-rimmed glass to the sturdy burghers of Berlin and Brussels over the water. What’s to stop the British government making the case for fairness – and putting in place policies that companies can work with? And will have to work with?

If, as Steve LeVine writes in Quartz, we are in a “a Kuhnian moment”, in the sense of Thomas Kuhn’s half-century old term “paradigm shift” – the revolt of the anti-elites – there is precious little attempt to re-adjust by the Entitled.

There is no doubt that redistributive justice has to be forced through in some way for people to feel less angry and “left behind”. There has to be discernible socialized business, socialized news gathering and dissemination, socialized story-telling and socialized goal-setting – in other words, a visible sharing of the levers of power and influence. But no one is taking the first step.