Everyone is going on about George Orwell and 1984 these days but I would venture to suggest that his essays are a whole lot better and possibly more germane to the moment in which we find ourselves. Especially ‘Marrakech’, which was first published in 1939, and is much less well known than some of his other essays, not least ‘Politics and the English Language’.

I’ll tell you why. In ‘Marrakech’, Orwell explores troubling themes such as racism, exclusivism, colonialism, de-humanisation, anti-Semitism. He does it in a way that makes clear certain freedoms are not fine and dandy – the freedom to speak offensively to or of someone and the freedom to behave as if they’re worms just because they’re coloured or Arab or female or gay or Muslim. In Orwell’s day, the marginalised were the coloured folks, women and Jews.

Bear in mind, back when he was writing ‘Marrakech’, anti-semitism, colonialism and the de-humanisation of non-white, non-Caucasian people were intensely divisive issues. Possibly just as divisive as accepting refugees today. Or being open and accepting of the world. Or refusing to smear all Muslims.

And yet Orwell found both the courage and the words to explain the moral and physical wrong of intolerance, exclusivism and rejectionism. Not only were they wrong, they affected people’s lives.

To me, the most powerful illustration of the invisibility of poor brown folks is in this passage about “firewood passing” his house and Orwell never realising that it was carried by someone:

“But what is strange about these people is their invisibility. For
several weeks, always at about the same time of day, the file of old women had hobbled past the house with their firewood, and though they had registered themselves on my eyeballs I cannot truly say that I had seen them. Firewood was passing – that was how I saw it. It was only that one day I happened to be walking behind them, and the curious up-and-down motion of a load of wood drew my attention to the human being underneath it. Then for the first time I noticed the poor old earth-coloured bodies, bodies reduced to bones and leathery skin, bent double under the crushing weight.”

If you don’t, here are a few extracts that offer a general idea of how and what Orwell was doing in this brilliant essay:

“When you walk through a town like this–two hundred thousand inhabitants, of whom at least twenty thousand own literally nothing except the rags they stand up in–when you see how the people live, and still more how easily they die, it is always difficult to believe that you are walking among human beings. All colonial empires are in reality founded upon that fact. The people have brown faces–besides, there are so many of them! Are they really the same flesh as yourself? Do they even have names? Or are they merely a kind of undifferentiated brown stuff, about as individual as bees or coral insects? They rise out of the earth, they sweat and starve for a few years, and then they sink back into the nameless mounds of the graveyard and nobody notices that they are gone. And even the graves themselves soon fade back into the soil.”

“When you go through the Jewish quarters you gather some idea of what the medieval ghettoes were probably like. Under their Moorish rulers the Jews were only allowed to own land in certain restricted areas, and after centuries of this kind of treatment they have ceased to bother about overcrowding. Many of the streets are a good deal less than six feet wide, the houses are completely windowless, and sore-eyed children cluster everywhere in unbelievable numbers, like clouds of flies. Down the centre of the street there is generally running a little river of urine.”

And this, especially relevant to the way that immigrants and even refugees are being demonised today:

“As the Jews live in self-contained communities they follow the same trades as the Arabs, except for agriculture. Fruit-sellers, potters, silversmiths, blacksmiths, butchers, leather-workers, tailors, water-carriers, beggars, porters–whichever way you look you see nothing but Jews. As a matter of fact there are thirteen thousand of them, all living in the space of a few acres. A good job Hitler isn’t here. Perhaps he is on his way, however. You hear the usual dark rumours about the Jews, not only from the Arabs but from the poorer Europeans.
‘Yes, MON VIEUX, they took my job away from me and gave it to a Jew. The Jews! They’re the real rulers of this country, you know. They’ve got all the money. They control the banks, finance—everything’.”

“In a tropical landscape one’s eye takes in everything except the human beings. It takes in the dried-up soil, the prickly pear, the palm-tree and the distant mountain, but it always misses the peasant hoeing at his patch. He is the same colour as the earth, and a great deal less interesting to look at.

It is only because of this that the starved countries of Asia and Africa are accepted as tourist resorts. No one would think of running cheap trips to the Distressed Areas. But where the human beings have brown skins their poverty is simply not noticed. What does Morocco mean to a Frenchman? An orange-grove or a job in government service. Or to an Englishman? Camels, castles, palm-trees, Foreign Legionnaires, brass trays and bandits. One could probably live here for years without noticing that for nine-tenths of the people the reality of life is an endless, back-breaking struggle to wring a little food out of an eroded soil.”

And finally, something that previews what parts of post-Obama America appears to fear in a visceral way:

“But there is one thought which every white man (and in this connection it doesn’t matter twopence if he calls himself a Socialist) thinks when he sees a black army marching past. ‘How much longer can we go on kidding these people? How long before they tum their guns in the other direction?'” 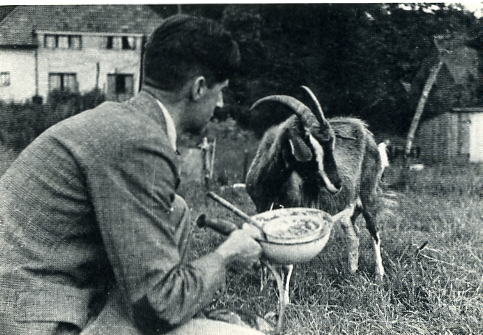