Fake news? Socrates gives it the finger. Lessons for the mainstream media 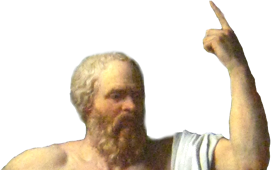 A piece in The Guardian the other day made a key point about the angst over so-called “fake news”. (The first step, I’d suggest, is to stop calling a lie “fake news”.)

Anyway, John Naughton wrote in The Guardian that “the mainstream media can fight back against the poisoning of our public sphere by giving people narratives they can understand”.

He cited the late Hans Rosling , who was professor of global health at Sweden’s Karolinska Institute and famous for his ability to break down complex data and ideas into simple concepts that a 12-year-old would be able to understand.

That’s a good point and it brings me to Socrates. He is the other, greater, example of the transmission of simple truths. What do you think of when you see the name Socrates?

A wise old Greek philosopher who belongs to the impenetrable classics. Actually, he wasn’t. Socrates never wrote anything or at least never wrote anything that anyone has ever found. He has been dead more than 2,400 years and is chiefly known because, as the Roman author Cicero, put it, he “brought philosophy down from the skies.” He wandered Athens asking people what they thought about the key issues of the day. Through those discussions grew an idea of the best and the worst ways in which to think and behave.

Bettany Hughes, the historian and author, who has looked into the subject quite closely (one of her books is titled ‘The Hemlock Cup: Socrates, Athens and the Search for the Good Life’) once described Socrates so vividly it’s almost possible to see him. In a newspaper article, Ms Hughes wrote: “Rather than being some kind of remote, tunic-clad beardy who wandered around classical columns, Socrates was a man of the streets. The philosopher tore through Athens like a tornado, drinking, partying, sweating in the gym as hard, if not harder than the next man. For him, philosophy was essential to human life. His mission: to find the best way to live on earth.”

To that end, Socrates felt the collective pulse, took the popular temperature and considered the best way to be happy.

Isn’t that basically what we all want? Those who are for Brexit and for Donald Trump and those who aren’t? Everyone really just wants to be happy. Everyone seeks the greater common good. It’s the definition of “common” that is in question. Who’s happiness is more important? My local community or the global one?

Is there a global community at all?

The media would do well to examine such issues rather than simply accepting the status quo.

In the aphorism attributed to Socrates, “the unexamined life is not worth living”.

Or as Ms Hughes said of the famous philosopher: “What is the point of city walls, warships and glittering statues, he asked, if we are not happy?”