In the past week, I’ve read and heard three significant pieces on John Dean. And one by him. For those not au fait with the name, John Dean was President Richard Nixon’s White House counsel, helped with the cover-up and later testified against the obstruction of justice at considerable cost to himself. (Threats to his life meant Mr Dean had to live in safe houses for pretty much a year-and-a-half.)

Now, Mr Dean is becoming the go-to guy for an American media that is trying to understand and explain President Trump and his White House’s paranoia about leaks, the cover-ups (for allegedly innocuous interactions between Trump aides and the Russian ambassador in Washington), and the sense that events may be heading towards a murky investigation of the administration.

How appropriate is this? Or is it just lazy journalism, the usual reaching for the first available peg to hang a story on?

Amy Davidson’s interview with Mr Dean in The New Yorker and Slate Trumpcast’s chat with him lay bare the parallels. Trumpcast said that now, as with Watergate, people are asking what the president knew and when he knew it. There’s also the matter of a break-in at the Democratic National Committee. That’s what it was in Nixon’s day; that’s what it is now, except that it’s a digital one. Finally, of course, President Trump himself has been evoking Watergate, except that he’s doing it to suggest that President Obama is the new Nixon!

Anyway, in all these pieces harking back to Watergate, Mr Dean steadies the rush of today’s news by reaching back into the past for the leaks, the cover-ups, the paranoia and the arrogance of the 1970s. He then proceeds to explain how the Nixon era compares with President Trump’s still-brief tryst with power.

He cautions on two key differences:

** Nixon thought the media were the enemies of the people, President Trump publicly says so.

** Nixon would probably never have faced the threat of impeachment had Congress been Republican; President Trump is lucky he has a Republican Congress.

But everything else seems dismally similar to Mr Dean.

As Albert Hunt writes on Bloomberg View, Mr Dean has a terrible sense of déjà vu over “the Trump-Russia connection, which President Donald Trump charges has been distorted by ‘fake news’ manipulators conducting a political witch hunt.”

He quotes Mr Dean: “If there is nothing there, nothing to hide, you open the doors and invite them in. When you start seeing a big pushback and blaming it all on the media, you know there’s something there.”

Hunt writes, “when Dean heard Republican Intelligence Committee Chair Devin Nunes declare recently that there’s ‘no evidence’ of wrongdoing, he says he thought of Hugh Scott. Scott was the Senate Republican leader who in 1973 repeatedly said he’d spoken to the White House and concluded that Watergate was much ado about little.”

It wasn’t. And it remains a stain on America’s collective political memory that shows no sign of fading, especially now. 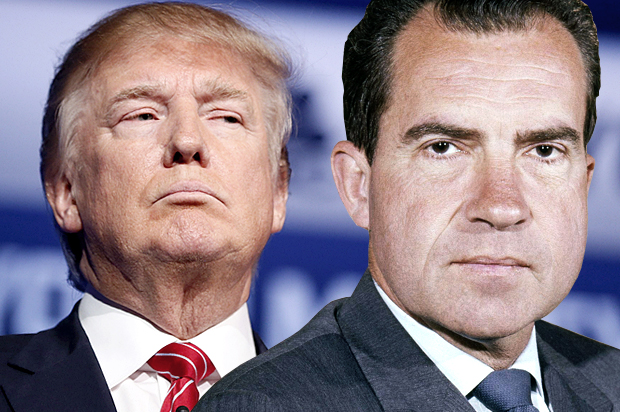