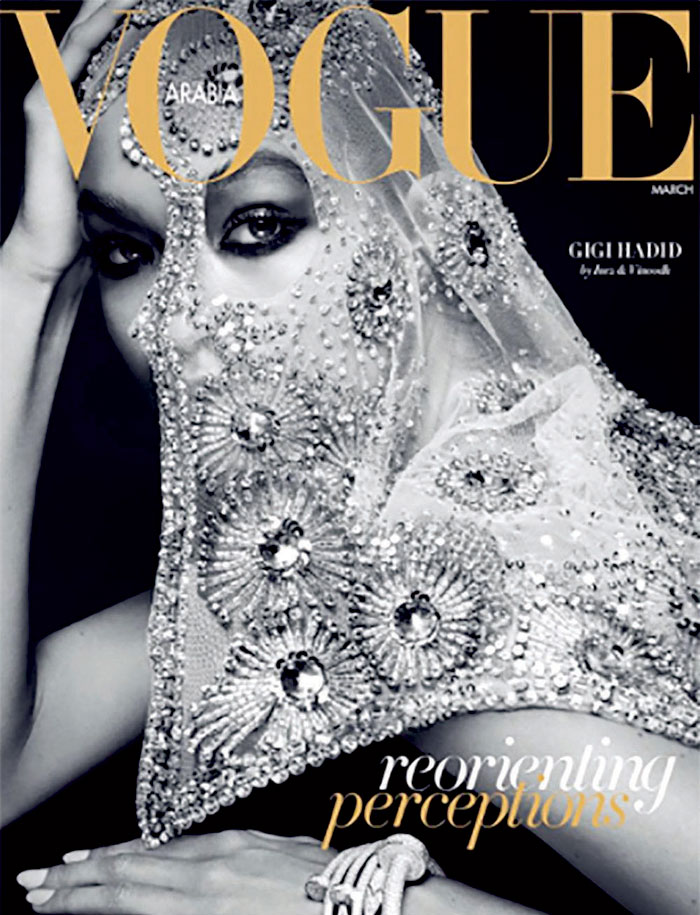 The launch of Vogue Arabia would have been just another sashay down the international publishing catwalk for the 125-year-old Vogue brand had it not been for the cover.

Or, to be more specific, the words on the cover. It reads “re­orienting perceptions” while the luminous face of Gigi Hadid, an American model of Palestinian and Dutch ethnicity, stares obliquely out at the world.

A filmy, sequined length of fab­ric covers Hadid’s head, runs down part of her face and obscures her neck and part of one shoulder. Her left eye is bared through an irregu­larly cut hole in the garment. The other eye and right half of Hadid’s face is unclothed.

In every way, the inaugural cover of Vogue Arabia challenges readers (and observers) to reori­ent perceptions. In so doing, it is bringing the concept of perspec­tive to the region where it was born 1,100 years ago.

The theory of perspective, which changed the course of Western art, was formulated in Baghdad by the 11th-century mathematician Ibn al-Haytham, whose name was Latinised to Alhazen. Or at least that is the view of the experts, not least Hans Belting, professor of art history at the Academy for Design in Karlsruhe, Germany.

We will get to al-Haytham’s influence on Renaissance art but let’s consider the “perceptions” that Vogue Arabia may be seeking to reorient.

First, the paradox of the title. It is Vogue, a high-fashion magazine that, some would say, puts women on show. And it is in Arabia, a region where, others would say, women are hidden away.

Second, the perspective of the veil. Vogue Arabia’s Special Pro­jects Director Mohieb Dahabieh, a Syrian who divides his time between Paris and London, puts it rather well: “The veil toys with the notions of paradoxical perception and ushers Gigi to a bygone mysti­cal era… So beautiful, yet — as the burqa debate continues to surface in Europe — so controversial. To some it’s the rejection of women objectified, to others the reverse.”

In this context, it is worth noting that the sportswear brand Nike has announced that it is manufactur­ing the Pro Hijab, a performance head covering made of a breath­able, light, stretchy fabric that will not come untucked no matter what Olympic-level activity is done by the athlete.

What this really means is that in the future, a hijab-wearing woman cannot automatically be perceived as an inactive stay-at-home sort. She could be a budding (or actual) Ibtihaj Muhammad, the first American-Muslim woman to represent the United States at the Olympics wearing a hijab.

Finally, there is the perspective of culture. Is Hadid, with her hair obscured, less or more of a person than the woman who appeared practically nude on the cover of Vogue Paris a year ago?

In some ways, Vogue Arabia’s outspoken editor, a Saudi com­moner married to a direct de­scendant of King Abdulaziz, exem­plifies the multiple contradictions between Vogue and Saudi Arabia, between a culture of concealment and the catwalk, between royalty peddling the mass consumption of fashion.

The editor, Princess Deena Alju­hani Abdulaziz, said she sees her magazine’s role as limited but im­portant. In response to a question from The Times of London about whether Vogue Arabia is meant to be “emancipatory for a young woman reading it”, Abdulaziz said she hoped it would “make this young girl feel that she has a voice”. She meant in terms of self-expression through fashion, which may be trivial to some but does still betoken the creative instinct.

It’s all about perspective as al-Haytham laid out in his Kitab al- Manazir or Book of Optics, which was known by the title of its Latin translation, Perspectiva.

What al-Haytham did was revolutionary in terms of seeing and ways of seeing. In Florence and Baghdad: Renaissance Art and Arab Science, Belting’s remarkable book on the subject, the profes­sor explains it as follows: “Arab visual theory gave a predominant role to light, which is essentially an iconic and relegated picture to the realm of the mind exclusively. Al-Haytham’s studies and the theory he formulated “laid the foundations for the model of linear perspective in the Renaissance”. By doing away with “all anthropo­morphic notions” from the visual process, he demonstrated that light governed the cosmos and the way we see.

Back to Vogue Arabia’s inaugural issue then. We see that cliché — a model on the cover of a fashion magazine — and perceive it as somehow different because of its covered head and intended reader­ship.