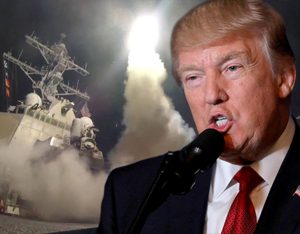 Look away from the missile attack on Shayrat airbase in Homs province and ask yourself why US President Donald Trump might have ordered it.

Was it because he genuinely cared about Syria’s “beautiful” babies? He thrust the image of those babies forward — a power­ful if invisible stage prop — in his televised explanation for the decision to send 59 Tomahawk cruise missiles as a message to Syrian President Bashar Assad.

What might that message be? That a new strongman is in the White House and unlike the namby-pamby former law professor Barack Obama, Trump talks tough and walks the talk.

It is hard to accept that Trump’s heart is truly touched and his conscience stirred by the televised pictures of Khan Sheikhoun’s poisoned children. It is difficult to believe that Trump really, truly, deeply cares about the suffering of people in faraway lands.

But the missile attack makes Trump look strong, decisive (and faintly moral, something he has not managed before).

There is good reason to be sceptical about the depth of Trump’s feelings towards Syria’s suffering. Initially, news of the chemical assault on Khan Sheikhoun meant no more than the following to Trump: Another chance to score domestic political points by hitting out at his predecessor Barack Obama.

The first White House state­ment on the tragic news out of Idlib was unambiguous. “These heinous actions by the Bashar Assad regime are a consequence of the past administration’s weakness and irresolution,” Trump declared. “President Obama said in 2012 that he would establish a ‘red line’ against the use of chemical weapons and then did nothing.”

Those initial remarks are important.

Britain, Turkey, France, Pope Francis (and even Trump’s daughter Ivanka) expressed horror and revulsion at the pictures of rows of lifeless little bodies. Outrage and sorrow lapped the world as the accounts came in of people dropping dead when they walked into a “yellow fog”.

There was collective sadness at the story told by Mariam Abu Khalil, 14, who had left home early in the morning for her examination on the Quran. She saw a plane drop a bomb and the subsequent explosion resem­bling a yellow mushroom cloud. “It was like a winter fog,” said the teenager, describing how she saw people rushing to help the wounded. “When they got out, they inhaled the gas and died.”

It would take a heart of stone not to be moved but Trump’s gut response was to attack Obama.

So, never mind the missile rain.

Never mind Trump’s subse­quent torrent of words for the Assad regime’s alleged use of chemical weapons against its own people.

Never mind US Vice-President Mike Pence’s implicit threat, which later became the missile strike: “All options are on the table.”

Never mind the delayed denunciation by Trump’s generally silent Secretary of State Rex Tillerson of an assault so poisonous and lethal that even the birds were said to have fallen from the sky.

Never mind that Trump’s UN envoy, Nikki Haley, did her usual folksy, fiery routine at the UN Security Council and followed it up with a hint that unilateral military action might be in the cards.

Never mind, in short, every­thing that followed Trump’s initial response to news that dozens of innocent Syrians, many of them children, had died painfully and needlessly — and probably because of chemical bombs.

Like first impressions, first reactions can be very revealing. Trump’s initial response to Syria’s worst chemical attack in years said a lot about him, about his apparent lack of immediate empathy for anyone who is not in his moral universe of care. Presumably that means people from “real” America — white, Christian, Trump voters.

The initial comments made Trump’s subsequent display of emotion appear ever so slightly fake. The attack “crossed a lot of lines for me”, he said. “When you kill innocent children, innocent babies — babies! — little babies, that crosses many, many lines.

Beyond a red line, many, many lines.” It sounded like something a reality TV star playing president might say, especially because the actor had previously taken a public position of indifference on a similar tragedy.

Four years ago, after an attack on Ghouta near Damascus, which was subsequently confirmed by UN inspectors as caused by the nerve agent sarin, Trump blithely tweeted about its relative unimportance to America and Americans. “President Obama, do not attack Syria. There is no upside and tremendous down­side. Save your ‘powder’ for another (and more important) day!” he wrote in September 2013.

That was then. Now, Trump is president. Despite the missile rain, it is unclear what, if any­thing, his administration will genuinely do to help Syria. After all, Trump’s initial response to Idlib’s suffering showed the callousness — the cold dead heart — of this administration.