It’s worth visiting world’s first ghetto, where the very word came into being. Especially now

If you’re visiting Venice, look away for a few hours from the beauty of the bridges, the light on the water, the poetry in stone of the city’s buildings.

Head for the Ghetto, the world’s very first (known) experiment in organized exclusion of a whole community based on religion, race and fear-mongering. The word “ghetto” came from here, this very part of Venice. The Venetian Ghetto’s rundown streets speak to the city’s policy of “separation and exclusion”, as Peter Ackroyd puts it in his biography of Venice. 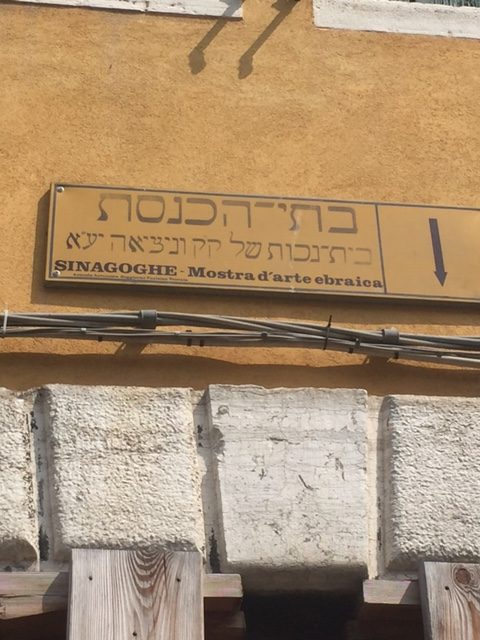 Here’s a thumbnail history of the Ghetto. The Jews, who had lived in Venice at least from the 12th century, had initially been barred from everywhere but the island of Spinalunga, later (and even today) named Giudecca. They were allowed only to practice medicine and money-lending and were reviled for taking up only those professions. 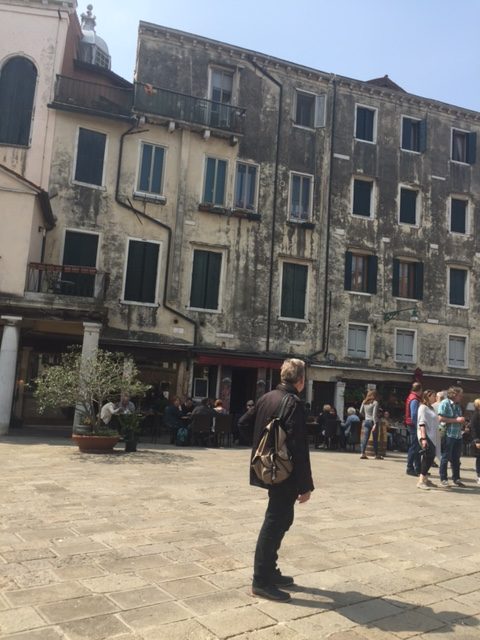 In the 16th century, the Jews of Venice became scapegoats for the political angst felt by the city over a series of military defeats in battle with cities on the Italian mainland. Venetian tolerance of “Christ-killers” was blamed and on March 29, 1516, the Jews were enclosed on the edge of the Cannaregio sestiere or district in the north of the city. The word “ghetto” came from the foundry or “getto” previously in the area.

As Ackroyd describes, inhabitants of the Ghetto were allowed to leave the area “when the marangona bell in the campanile of Saint Mark’s rang at daybreak, but they were obliged to return by sunset. At that time, the drawbridge was raised. The Jews were locked in for the night.”

The streets of the Ghetto have tall buildings – space was at a premium, so houses grew upwards, and still there wasn’t room for the Jews. Ackroyd says that there was such little floor space in the Ghetto that “some people had to sleep at separate times of the day or night…” The Ghetto was outwardly blind, for all its windows looked inwards. Ackroyd explains that all visual contact between Jews and Christians was prohibited.

To visit, alight at the Guglie boat stop on the Vaporetto (water bus).

I visited in Passover week so the museum was closed and two soldiers and a black-uniformed policeman kept watch on the Ghetto square. 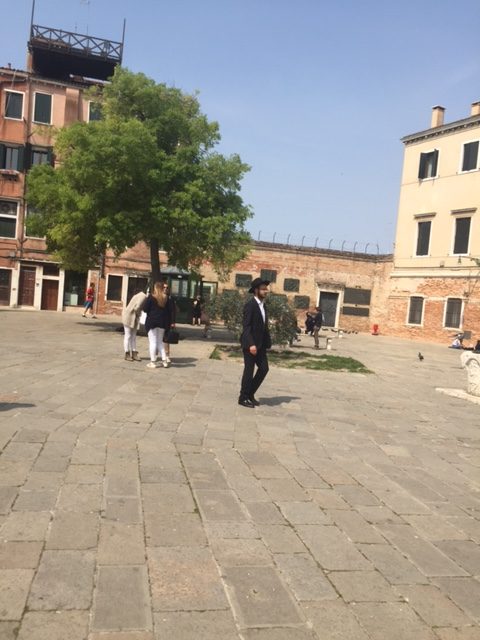 Orthodox Jews went about their business. The kosher restaurant advertised Pesach specialities. The Melori & Rosenberg Art Gallery (owned by the married couple D.C. Bedello and Luigi Rocca) plied its customary trade. It proudly claims to be the first contemporary art gallery in the Ghetto and appears to deal, mainly and somewhat surprisingly perhaps, in hyper-real paintings of scenes from modern American life. When I visited, there wasn’t a single canvas about the Ghetto on its walls. 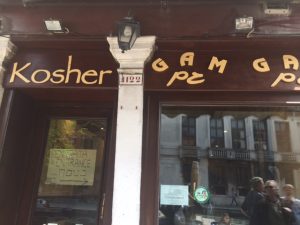 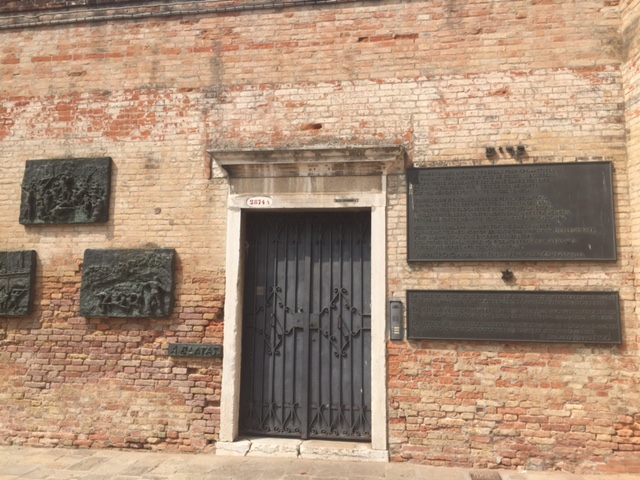 Visitors silently looked at the city’s mea culpa in the Campo del Ghetto Nuovo. This is its acknowledgement of the wrong that Venice did to Jews in November 1943, when it declared them ‘enemy aliens’ and deported them mostly to the Auschwitz-Birkenau concentration camps.

The Ghetto in Venice is a good place to think of man’s inhumanity to man.

Especially perhaps in this year of rising intolerance. 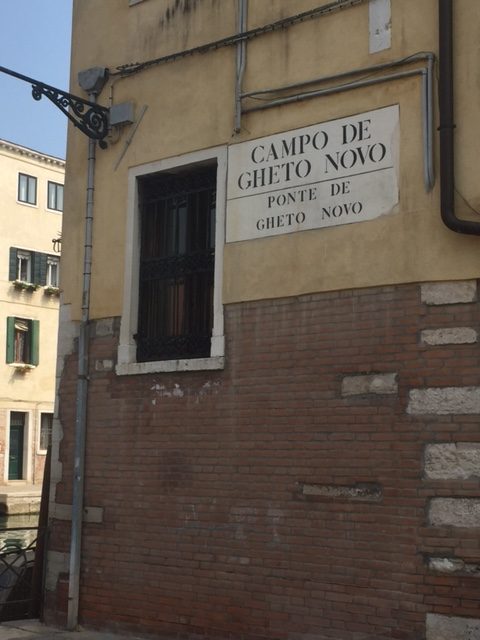