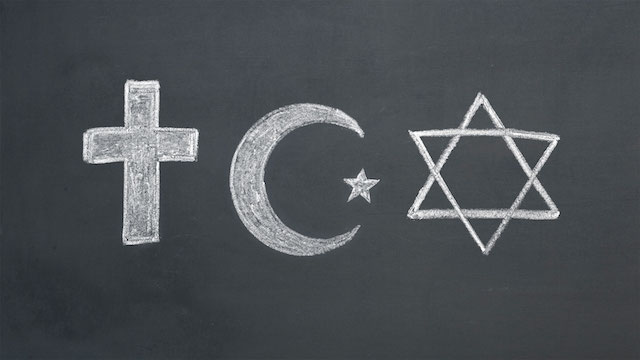 For a patently irreli­gious man, Donald Trump is pressing God into service a lot. As he embarks on his first overseas trip as US president, his itinerary appears to be conspicuously constructed around the concept of monotheism.

The thread that links Trump’s first three foreign destinations — Saudi Arabia, Israel and Vatican City — is their status as the centres of Islam, Judaism and Christian­ity, respectively. Trump has sanc­timoniously cast this package tour of the home of three Abrahamic religious traditions as a pitch for “tolerance… the cornerstone of peace.”

The sentiment would not have been out of place in a papal statement. Or Jimmy Carter’s White House. The 39th US president had a deep and abiding personal faith. It caused him to be called America’s most famous Sunday school teacher with all the boring wholesomeness that implied. And then there was the darker mani­festation of presidential religios­ity in George W. Bush. He claimed divine consultation before invad­ing Iraq.

Trump is nowhere near that point but he appears to have had a religious conversion of sorts, at least in terms of rhetoric. Since early April, he has used the phrase “children of God” twice, possibly to create the halo effect of a US president guided by just principles.

Trump mentioned “children of God” as the reason for lob­bing Tomahawk cruise missiles at a Syrian airfield on April 7. Barely a month later, he repeated the phrase standing alongside Palestinian Authority President Mahmoud Abbas but this time it was a verbal missile aimed at the Palestinian people. “All children of God must be taught to value and respect human life and condemn all of those who target the innocent,” Trump said, in rebuke to what he described as the “hatred” and “incitement for violence” among Palestinians.

Finally, of course, there is Trump’s impending obeisance to the idea of religious tolerance through successive trips to Riyadh, Tel Aviv and the Vatican.

Trump’s increasing reliance on religion as a positive force sits oddly with his record as a politician. On the campaign trail, Trump used, nay abused religion, or at least one particular faith, Islam. He repeatedly miscategorised its tenets and the motiva­tions of its followers. As president, one of his first actions was to target a clutch of mainly Muslim countries with a controversial and arbitrary entry ban.

He has displayed similar cynicism about the value of the Christian faith. As a candidate, Trump shamelessly wooed and won evangelical Christians, who account for about 25% of the American electorate. Despite his obvious disinterest in the theo­logical virtues of faith, hope and charity, Trump presented himself as a president who would literally empower Christian values. It worked.

Evangelical voters disregarded Trump’s evident ignorance of the Bible and norms of church-going behaviour. They ignored Trump’s brazen admission that he saw no reason to seek divine forgiveness for anything. And they appeared not to notice his comically brief, vague and unconvincing remarks about divine concepts, notably in response to the Christian Broad­casting Network’s question “Who is God to you?” Trump replied with an inanity (“God is the ultimate”) before changing the subject to a great golf course deal.

Evangelicals have continued to support Trump’s controversial actions as president, not least the ban on Muslim entry and appar­ent hostility towards non-white, non-Christian immigration to the United States.

So what is with the upcoming multifaith tour then?

How does Riyadh fit into this world view?

“Transactionally” is the short answer. The Saudi capital will serve as a handy backdrop for a propaganda exercise that is meant to counter the impression of raging Islamophobia within the Trump administration.

Scheduled meetings with King Salman bin Abdulaziz Al Saud, the Gulf Cooperation Council officials and other Arab leaders will feed into a shiny new narrative, one that Trump recently described as constructive cooperation “with our Muslim allies to combat ex­tremism, terrorism and violence.” This will convey the impression of tensile strength in dealing with terrorism. It is likely to play well to the American public back home.

Israel will provide an opportu­nity for Trump to appear engaged in brokering a peace deal with the Palestinians.

Meeting Pope Francis will give a soft-focus impression of humil­ity and grace and continue the nearly 100-year-old tradition of interaction between pontiffs and American presidents.

All of this will make for compel­ling theatre but it is hard to take it as anything more.

The eager Arab interlocutors gathered in Riyadh may praise Trump as “a true friend of Muslims,” words used by Saudi Ara­bia’s deputy crown prince when he visited Washington. But the hosannas will be realpolitik, an appreciation of Trump’s hard line on Iran and softness on human rights issues.

It is a moot point whether the Arab leaders can even be said to wholly speak for their people, especially the young. A recent survey of 18-to-24-year-olds across 16 Arab countries revealed profound disgust with the Trump administration’s attitude towards the Muslim world. It is unlikely that young Arabs would describe Trump as a “true friend of Muslims.”

Trump’s Israeli-Palestinian deal-making will also be a shadow play, so long as his administration offers no road map, no promise of a two-state solution and no guarantee that the US embassy will not suddenly be moved from Tel Aviv to Jerusalem.

As for the pope, candidate Trump denounced the head of the Catholic church as “disgraceful,” an act of disrespect for which he has never apologised. It is hard to see what, if anything, this bombastic and divisive politician shares with a simple Jesuit priest who espouses progressive values.

The monotheism tour may end up as no more than another epi­sode of the Trump reality show.